The A-Z of Geek Cinema: W is for the Wrestler 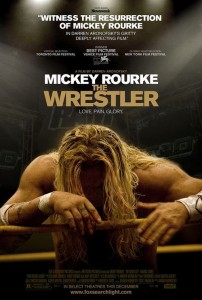 Let us now sit in praise of Darren Aronofsky. One of my favorite directors working today, Â and one whose (still growing) film oeuvre is extremely varied, while showing a remarkable amount of consistency, in either look, performance, editing style, or collaborators.

His first two films,Â PiÂ andÂ Requiem For A Dream, had a lot of stylistic touches, very overt and showy, almost. Not to the “oh look at me, I’m fancy and can do these fancy things” point, but in ways that service the story being told. The editing ofÂ RequiemÂ was rhythmic, sticking to a beat and pattern that repeated throughout the film (Aronofsky refers to it as “hip-hop editing), as the point was to inure the audience to the acts of drug abuse, and make it a very big deal later when the pattern lengthens, or is interrupted, or changes. It exemplifies the point that addiction is all about habit and repetition, and that it is a cycle that only degrades.

The Fountain, his third film previously discussed here, while as stylistic as the earlier films in its own way, did less with rhythm, but was all about visual patterns, the same images and actions used at different points in the film to (both overtly and subtley) connect different scenes and time periods. The theme of “recurrence” was an important point to be made and stressed, and thus the similarity of such disparate time periods as 1500’s Spain, Modern day America, and the deep space of the far future was brought to bear, and made to relate to the movie’s theme of death, rebirth, and acceptance. Death is nothing to fear, the film says, and while it maybe should not be celebrated, it should be embraced as a necessity.

The WrestlerÂ uses very little of these tricks, and in fact goes as far opposite from those films as possible in terms of style, to point of being very documentary-like in feel. The grain in the image implies harsh reality, and the washed out colors of everything in Randy “The Ram”‘s life, accentuate the vividness the film adopts during the scenes of action in the ring. The blood and lights “pop” that much more when contrasted with the mutedness of Randy’s trailer, really of his entire life outside of the ring. Like all of Aronofsky’s films thus far, this relies, at its center, on the interpersonal relationships between its characters; in this case, between Randy and the people in his world: his estranged daughter Stephanie, his only real “friend” Cassidy/Pam, and the various acquaintances of his wrestling career. Aronofsky has always focused on how people relate to their world and each other, and Randy’s disconnect from both is at the heart of the film, and the reasons for why it looks the way it does. 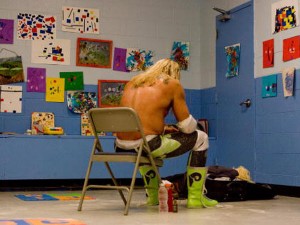 Repetition still plays a small part in the film, as it is, in its own way, about addiction. Contrast the scene of Randy’s walk-out to the ring in the beginning of the film with his walk out to the floor on his first day at the deli counter: the crowd noise piped in over the latter seals it, as does the exact same type of plastic curtain in front of each place’s respective entrance. Randy is addicted to the crowd, the noise, the reaction he gets from people who know him as a character. He gives them his sweat, his blood, his very life, and they applaud, they cheer, they chant. He needs that, he craves that, and his life is a complete shambles because of it. His health, his family, his ability to deal with every day life: all sacrificed within the altar of the “squared circle.”

There’s more to say about the film, and its themes and ideas, like the similarity between Randy and Pam’s stories, and his own self-destructive streak, and the (deceptively) unambiguous ending, but I wanted to stick to discussing the look of it. Aronofsky and Rourke, especially, deserve all the credit in the world for a wonderful piece of filmmaking and acting.

Even more interesting was his choice of follow-up, Black Swan, for which he won much acclaim as well. There’s similarities in plot structure and subtext to The Wrestler, though SwanÂ does interesting things by contrasting the shooting style used for The Wrestler with the overtly stylistic and weird, almost hallucinatory, imagery used for the latter film. Some of the same shots mentioned above are repeated in Black Swan, drawing the parallels even further.

There’s a direct line to be drawn as well, from the earlier film to the later one, in the idea of needing an audience, needing the performance.Â We’re all looking for the crowd’s roar. Very few of us ever find it. The ones who do, sometimes have trouble letting it go.