The A-Z of Geek Cinema: U is for the Untouchables 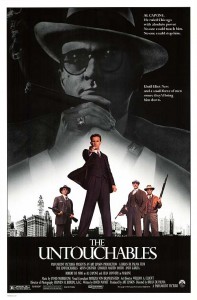 This is a manly goddamn movie.

Brian de Palma’s film of David Mamet’s script is, and I don’t use this word often, epic. The operatic sweep of the cinematography and the extremely quotable screenplay combine to make a modern classic, but one with a distinctly retro feel. De Palma has often been accused, and rightly so, of being a Hitchcock wannabe, what with the constant direct visual references to the man’s work. But The Untouchables, while containing a few itself, has just as many that have become reference points in their own right.

The speech made by Robert DeNiro as Al Capone, talking about baseball and then beating a man to death with a bat; the stalking of Sean Connery’s Malone in his own home; the iconic train station stake-out… all these are in the film lexicon now, having been parodied and referenced in other films (and of course on The Simpsons as well.) And taken separately, they are fun and involving. But it’s the place within the film itself that give them the iconic status. The run time is filled with little and large moments like the above.

The accuracy (or lack thereof) to history aside, the time period itself is interesting to me. The Prohibition was an era where American culture itself shifted, and it’s a direction that hasn’t really changed much in the almost 100 years since. You can see the beginnings in HBO’s Boardwalk Empire, and the beginning of the end here. There’s been plenty of films about the time, of course, but none seem to be as exciting or thrilling as this. And I can only attribute that to de Palma and Mamet. 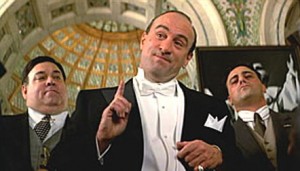 That’s not to downplay the performances, as Kevin Costner does his usual thing (but does it well), and Connery and DeNiro practically run away with the picture. Though I still can’t quite reconcile Connery’s Scottish accent with his character’s Irish background. But that’s just how he rolls, I suppose. It doesn’t take me out of the picture, at all.

In any event, if you haven’t seen this film, RECTIFY THIS. It is a legitimate modern classic. And it is manly as hell.