The A-Z of Geek Cinema: T is for Tron: Legacy 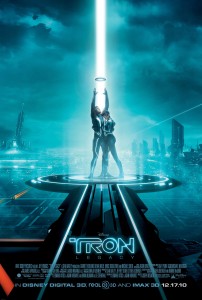 All the pretty lights and amazing music in the world won’t be able to overcome a lackluster plot and awful dialogue. Tron: Legacy is the poster child for this. With wonderful production design, very well-done 3D, a built-in audience nostalgic for the original, and a fantastic score by Daft Punk, the sequel to 1982’s Tron just can’t get past its half-baked center. Not to mention the creepy Uncanny Valley crossing of CGI Jeff Bridges. But I feel like I’m getting ahead of myself…

The original Tron was groundbreaking for its time, one of the first films to use extensive computer generated effects, to the point that the bulk of the effects are CG. The unique look of the film resulted from the necessary concessions the filmmakers had to make in order to facilitate the effects work, but in the intervening years, the look has become singular and synonymous with the film, to the point that ads and other forms of media use it as a short-hand for “computer stuff.” With production design from futurist Syd Mead (who also worked on Blade Runner) and comic artist Moebius, the sleek forms and flat colors accented by light lines still define “cool”. Its plot was simplistic, and nothing to really write home about, but it was for the most part just a skeleton to hang the visuals on. Jeff Bridges’ performance as Kevin Flynn had a memorable charm to it. And the movie’s score was done by Wendy Carlos, a famed electronic musician who’d also scored A Clockwork Orange and The Shining for Stanley Kubrick. On release though, the film was a flop, praised for its advancements but practically ignored by audiences. In the years since, it’s become a cult classic, known by many, if just for its visual style.

Disney had been trying to get a sequel off the ground for years. There’d been continuations of the story through video games and comics, but nothing on film. Finally, in 2008, director Joseph Kosinski signed on to direct what was then titled TR2N. Anticipation grew as more was made known about the sequel, later retitled Tron: Legacy. The bits of production art that leaked out were suitably sleek and futuristic, and the announcement that EDM artists Daft Punk were doing the score was met with rapturous joy. Getting Bridges back to follow up in his role of Flynn was icing on the cake, and with a leading man Garrett Hedlund, who was seen as a breakout star waiting to happen, a hit was all but guaranteed. The trailers released were great looking, full of a CG paradise gone dark and tight black outfits with light piping. It looked like Tron, all right, and ’80s nostalgia being what it is, everyone expected the movie to at the very least meet expectations, if not surpass them.

Unfortunately, everyone was so worried about making the movie look “cool” that they forgot to write a script. Tron: Legacy suffers from many of the same problems that the original does: the plot is meandering, the dialogue vacillates between too dry & arch and too “new age”y. The effects and design are still incredible, if a bit less amazing in context than the original; the legacy of Tron (heh) was to influence almost all scifi films since (Blade Runner is possibly the only bigger influence visually), and there just didn’t seem to be enough of a leap from the original to the sequel to justify the time in-between. The inclusion of 3D helps, as it was shot for the format and is extremely well-implemented, and the Daft Punk score IS amazing (I listen to it often when I’m writing), but it’s not enough. 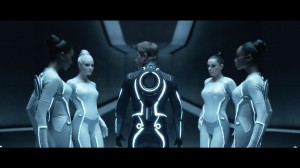 Going along with the points above, we come to CG Jeff Bridges. An idea that in theory would be interesting, and has been somewhat implemented in past films (though in much less intense ways), the CG de-aging of Bridges treads so far into the dead eyed realm of the Uncanny Valley, that it goes back from bad into hilarious. The core idea of a bad program version of Flynn getting too big for his britches is solid, but, as seems to be the norm for the film, the execution lacks. The other major glaring flaw is Hedlund’s character, Sam Flynn. Saddled with the boring “Hero’s Journey” archetype which has become more and more blatant the farther we get from George Lucas’s sucking of Joseph Campbell’s teat, Sam is a non-entity. Without any clear character traits other than “a bit of a bad boy”, there’s nothing to hang on to, no emotional core to be drawn from. Even the original Tron, for all its flaws, had a solid story to build on. The script for Tron: Legacy just feels like a cover version of the original with a Campellian narrative laid on top of it, plus Olivia Wilde. Which I support, actually, because we all need more Olivia Wilde.

In any event, the film did not set the world on fire. It’s budget ultimately ended up so huge that its $400 million worldwide gross made it seem like a disappointment. Critics liked its visuals and music, but heavily disparaged its script and cast. A sequel is in development, though I wonder how enthused Disney is to spend more money without a guarantee of a nice return. Maybe, though, now that the groundwork has been laid, a sequel can build off the world established and go big. I mean, really big. Tron and Tron: Legacy both took place in computer worlds not connected to the Internet. A Tron version of the actual digital connection age might be the groundbreaking edge the sequel needs to differentiate itself from the rest of scifi. And hey, another Daft Punk score would be awesome. 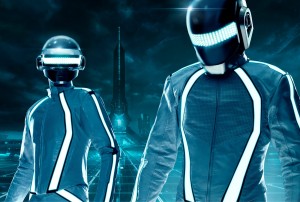