The A-Z of Geek Cinema: I is for I’m Not There 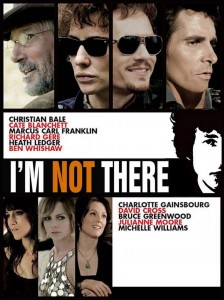 We all contain multitudes. That’s what Whitman said, right? All of us are many people. Daughter, sister, mother, aunt, coworker, friend, acquaintance, enemy… all in one body & mind. Every day, we put on our faces and go into our lives and live out the parts we’ve assigned ourselves, and think nothing of the different roles we slide in and out of. Bob Dylan is no different, except he purposely does it. He’s been so many different people that no one can be quite sure who the “real” Bob Dylan is. Todd Haynes’ film I’m Not There literalizes this, and has 6 different actors play 6 different interpretations of Dylan’s various personae through the years. It is strange, and ambitious, and most of all, incredibly appropriate.

This multiplicity of personality is what has allowed Dylan to shift his music to the whims of his own muse throughout the years, while still maintaining the air of mystery that seems to be a necessary part of his makeup. There’s explanations and theories out there, of course, but nothing confirmed by the man himself, nor is there ever likely to be. He remains charmingly inscrutable in interviews, roaming from twinkle-eyed trickster to bitterly reproachful, often in the span of a single sentence. The film captures this capriciousness well, both in its approach to the characters themselves and in the choices of casting.

This was one of the last roles for Heath Ledger, so his role as “Robbie Clark” (standing in for Blood On The Tracks-era Dylan) takes on especial poignance, but all the actors are uniformly excellent. Christian Bale plays a role in two different segments, both as “Jack Rollins”, a young folk singer known for his protest songs, and as “Pastor John”, though there is a connection between the two that suggests the latter is the former many years later, mimicking Dylan’s conversion to Christianity following a motorcycle accident. Marcus Carl Franklin and Richard Gere play “Woody Guthrie” and “Billy the Kid” respectively, representing the opposite ends of Dylan’s life. Ben Whishaw plays “Arthur Rimbaud”, who responds to all questions with quotes from Dylan interviews and writing.

But the best casting might have been Cate Blanchett as “Jude Quinn”, a rock star who is mirroring Dylan’s own emergence from the folk scene and subsequent controversy when he “went electric” at the Newport Folk Festival. Blanchett plays him as a shambling wreck, unsure of where to go and what to do, as every choice he makes trying to break free out of his previously established persona results in audience backlash and media nattering. He hangs out with Allen Ginsberg, played excellently by David Cross, and Brian Jones, does massive amounts of drugs, and yells at Jesus on a cross about “Why don’t you do your early stuff?” Blanchett nails the inherent contradiction in Dylan, especially around this period, and the deep-seated insecurity that must have fueled his transition from “folk hero” to “rock culture figurehead.” It’s small wonder she was nominated for an Academy Award for this role.

This is all not to downplay the role of Todd Haynes’ direction or script. The usage of Dylan’s own words, both as script and as incidental music, works wonders to establish the mood and feel of each segment, and the different looks given each one both differentiates them from each other, increasing the sense of it being different people, but still allowing the connections to shine through. Again, special attention should be paid to the “Jude” segments.

But what does this say about us? Like said above, we all contain multitudes, so why does the multitudes in Dylan require special attention, outside of the mystique around it being “Bob Dylan”? It’s that very mystique that does it, not the idea that this man contains many men, but that he is conscious of it and uses it to fuel his career and art. He is aware of it, and in fact chafes at being pigeonholed and labeled as one thing or another. Thus, he changes. There is only one Robert Zimmerman, but there’s been many Bob Dylans. The final words spoken by Richard Gere’s “Billy the Kid” sums it all up very well: “People are always talking about freedom, the freedom to live a certain way without being kicked around. ‘Course the more you live a certain way the less it feels like freedom. Me? I can change during the course of a day. When I wake I’m one person, when I go to sleep I know for certain I’m somebody else. I don’t know who I am most of the time. It’s like you got yesterday, today and tomorrow all in the same room. There’s no telling what can happen.”