The A-Z of Geek Cinema: S is for Scott Pilgrim Vs The World 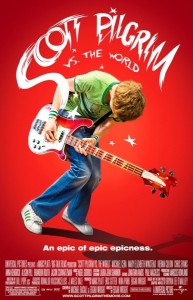 I love Edgar Wright. I love Bryan Lee O’Malley’s Scott Pilgrim comic series. So it’s fairly obvious that I would be very much in the bag for an adaptation of said series by aforementioned British director. I eagerly followed all casting and production news for it, devoured all the trailers and music videos, put the poster all over the place I worked at, even got retweeted by Edgar Wright on Twitter because of some crazy thing I said on there or another (which actually indirectly lead to me writing for this very site.) So what did I think of it? Well, I loved the dick out of it, is what I did. And here’s a bunch more words about why…

Scott, as a character, is a bit of a prick. He is callow, oblivious, a little dumb, and definitely inconsiderate of his friends and girlfriends. He’s also clever at times, funny, and a bass player in a band. And while all these qualities are evident throughout the entirety of the series, it’s not til the 6th and final book that it’s obvious how much he tries to ignore his past in order to forget his mistakes. This is not as apparent in the film, but the qualities are all still there, in abundance. And they result in Scott, at first, being a likeable asshole. And the story is his journey to not being an asshole.

As it stands, I think the film is a master class of cinematic technique. Everything is orchestrated at the smallest level by director/co-writer Wright (he of Spaced, Shaun of the Dead, and Hot Fuzz, all awesome); the shot selection, the pacing, the editing, the way the scenes transition through dialogue and location all in a couple seconds of screentime. Wright takes the already very well-constructed source material and infuses it with even more energy and pop culture nerdity. The perfect casting of every character helps, especially with Kieran Culkin as Wallace, who practically steals the movie, and Ellen Wong as Knives Chau, who emerged as a much stronger character than I anticipated. 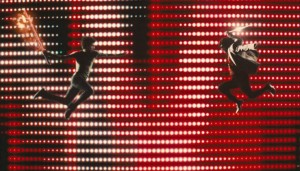 The movie (and books) reflect a lot of what makes the current culture of the US so unique and exciting: the generation making art right now is the one that grew up with all the tools and all the past at easy reach. There is an almost universal vocabulary at work, between movies and television and video games and comic books and music, all adding up to various forms of amalgamation and reference, that allows the creators to use the signifiers inherent in each reference to comment and contrast and relate to others which may not be as immediately apparent. Scott Pilgrim uses the video games of the ’80s and ’90s to establish a vocabulary for the fights and for how Scott sees the world he lives in. The music of the band is soundtrack and greek chorus at the same time. The “Seinfeld” cue in the film is another example of this: Scott sees his life as a sitcom, so the movie starts using the sitcom’s music and laughtrack. Everyone sees their own life as a movie now, Scott is someone who just happened to have his made.

TANGENT: I’ve seen this described as “hipster” all over the place. In fact, it’s hard to get away from the word while reading about the series as a whole. And I think that’s selling the book short, and in fact, a blatant lie about it. The whole “hipster” aesthetic, aside from how people refer to anyone young in a certain style of fashion with the epithet, is based in irony and distance. Much like the stereotype of “Generation X” from the ’90s, hipsters are seen to dislike sincerity, and to look down on liking anything too much. Which, if you know anything about Scott Pilgrim, is as far from what the books are as you can be. In fact, if anyone is a stereotypical hipster in the book/movie, its the villain, Gideon Graves. TANGENT OVER. 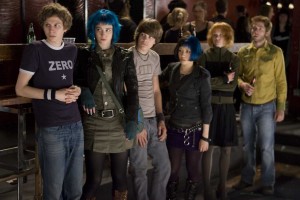 I can’t stress enough how much I love this movie. The cinematography, the editing, the music, the acting, the directing: I love everything about it. I hold no illusions about it though: it’s a difficult movie to describe, much less sell to the public. It wasn’t a huge hit at the box office. But ultimately, that doesn’t matter. Because it’s an amazing film, and it’s found its audience and vice versa. I see this being like Fight Club, or Eternal Sunshine of the Spotless Mind, not a whole lot of attention in theatres, but finding an audience on BluRay/DVD. Because of this film,Â I think there’s been a whole lot of young directors inspired to make movies in the future.

So yes. This was one of my favorite movies of 2010. See it, if you have yet to. Give Edgar Wright all your love and attention. Give Scott Pilgrim your heart. And it will love you back.