The A-Z of Geek Cinema: R is for the Royal Tenenbaums 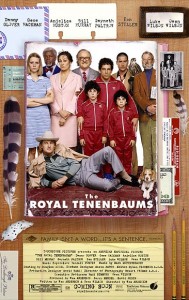 Wes Anderson creates worlds. Most films of his belong to their own environment, with little to no connection to the reality we all belong to. This is true, even more than the others, of his 2001 film The Royal Tenenbaums, which takes place in an almost completely fictional version of New York City. But even more than that, the world in which the Tenenbaums live is different, almost hyper-real.

I feel like some clarification is necessary first: by “creates worlds”, I mean that Wes Anderson takes a very specific and exacting aesthetic, and applies it to the real world, creating a hyper-real and phenomenally detailed environment in which to place his characters. The actual time and place are almost irrelevant, as the immediate environment supersedes any sort of signifier that you can think of. Take The Royal Tenenbaums, specifically. It ostensibly takes place in New York City the nebulous “now”, the modern day. But the location of the Tenenbaum house is a non-existent address in NYC, there’s nothing in the movie that is specifically “New York” (by which I mean recognizable landmarks or neighborhoods); there is actually a shot which Anderson framed specifically so a character would cover the Statue of Liberty which would otherwise be in the background. The time period is supposedly now, but everything from the clothing to the toys to the technology screams “late ’70s”. The music choices, always very important to Anderson’s films, for the most part reflect this as well, with every song being from the ’60s/70s era, other than the very specific exception of Elliott Smith’s “Needle In The Hay” during Richie’s suicide attempt. 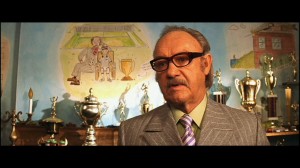 But moreso than I would say with any of Anderson’s other films, the aesthetic of the Tenenbaums’ world is a fundamental part of the story of the film. Whereas in something like The Darjeeling Limited, the look and detail in every frame seems almost precious and forced, Tenenbaums looks the way it does, like it’s stuck in the late ’70s, because that’s when the characters themselves are all stuck. The movie itself is about not overcoming early success; the Tenenbaum children were all lauded as geniuses at an early age, and, as the screenplay itself says, “All memory of the brilliance of the young Tenenbaums had been erased by two decades of betrayal, failure and disaster.” Royal, having been kicked out of his house and marriage, has been living in a hotel since that time. The family has, for the most part, been in stasis since Richie’s meltdown on the tennis court. Yes, they have had their own lives & “adventures”, but as people, they’ve not moved beyond who they were when they were “somebody.” It then fits that everything around them would seem stuck in a past that we can remember but have also long since moved past. It’s also interesting that the catalysts for the plot, for the most part, are two-fold: Etheline getting engaged to Henry Sherman and Richie returning from his overseas sabbatical to tell Margot how he feels, both of which throw the power structure of the family out of whack.

Wes Anderson is, in case you couldn’t figure it out, one of my favorite directors, and The Royal Tenenbaums one of my top 5 favorite films. Looking at it from the view of the aesthetics and Anderson’s tics & tropes has actually made me love it even more. And that’s the mark of a great movie: you can continually go back and find new things to appreciate and love about them. THAT is why I love film.