The A-Z of Geek Cinema: M is for Memento 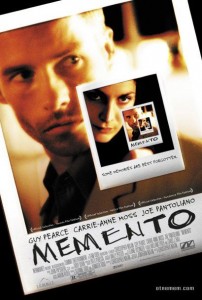 “We all need mirrors to remind ourselves who we are.”

You’ve heard of this movie. Haven’t you? It’s the one that goes backwards, made by the guy who didÂ The Dark Knight. Except that’s not strictly true. Yes, it begins at the end of the story, and ends at the beginning, but interspersed throughout it are scenes that actually play in the correct chronological order, until the two meet. The movie is a mirror of itself. And if you look closely, and carefully, the movie itself is a mirror. If you can remember to look, anyway.

Leonard Shelby’s condition, which is literally mirrored in the B-story of Sammy Jankis (whose reality is called into question later in the film), naturally lends itself to reflection and second-guessing. He knows enough to know he can’t really KNOW anything. He believes that when he catches his “John G.”, he will remember. But he can’t know. And he never will. When his wife was raped and murdered (or just attacked, who can say?), his head was cracked on a mirror. And that’s the moment he went “through the looking glass”, as it were.

So the question remains: if Leonard becomes a mirror, becomes the reflection, who is he reflecting? Is it the audience? Teddy? Natalie? Sammy Jankis? And the answer is: all of them. Because of his condition, Leonard himself becomes a mirror, that other people use to see themselves more clearly, or take advantage of for their own uses. He says he can only really talk to people when he can look them in the eyes, that he can tell when someone is lying. And then goes on to show that he can’t, as he is constantly on his backfoot and reacting, even when he thinks he’s being proactive. In fact, the end/beginning shows that he’s been on the wrong track the whole time, deceived by himself. When the reflection is reflected, it doesn’t become correct, it just becomes further distorted.

It’s this distortion that accounts for the “gimmick” of the film. By having part of the film running backwards intercut with part running forwards, the audience is kept in a state of bewilderment along with Leonard. We learn things as he learns them, with the benefit of being able to remember, unlike him. It puts to lie the notion that hindsight is 20/20, as Leonard, and thus the audience, lacks all hindsight. He, and the film, are a guided missile, pointing ever forward and ever onwards, any looking back lost in the contrails. Because of this momentum, the process of our memory becomes suspect, and even some of the editing plays around with this, as flashbacks appear slightly different, characters we don’t expect showing up in places where they shouldn’t. Do you remember Sammy Jankis? Was it Sammy the whole time?

We all need mirrors, yes. But reflections can be warped. Just like memories.

Where were we, again?