The A-Z of Geek Cinema: I is for In The Loop 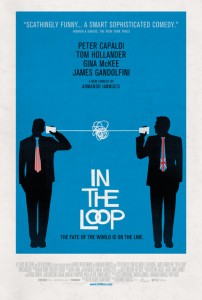 Vulgar, funny, and poignantly trenchant, Armanda Ianucci’s 2009 film In The Loop is not only one of the most quotable films I’ve ever seen, it’s also the scariest.

A spin-off of sorts from the BBC series The Thick Of It, the film is concerned with a low-ranking MP in Parliament who makes a… rather regrettable comment about the unforeseeableness of war. This catapults him into a world of half-truths, non-lie lies, and spin so thick that your head turns. It just so happens that this “unforeseeable” war is quite foreseeable. There just hasn’t been justification for it yet, and Simon Foster has opened the bag early, as it were. The heavy in all this is the Prime Minister’s head of spin (and the lone character who crosses from The Thick Of It), Malcolm Tucker.

And Malcolm Tucker is why this movie is great. I mean, don’t get me wrong, every actor is really funny and sharp and full of various amounts of bile and sarcasm, from James Gandolfini and David Rasche to (also from The Thick Of It) Chris Addison and Tom Hollander. But Peter Capaldi’s turn in the film is on a whole other level of venom. His every word and action drips bitter, caffeine-fueled menace, and some of the insults he drops are among the most random and swear-filled bon mots I’ve ever heard. I can’t really repeat most of them, as they are almost to the last too profane to subject to you. Just watch this video, it’s my favorite. (NSFW, natch.) 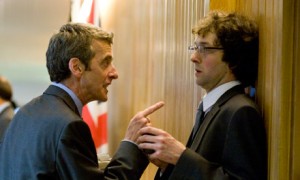 But Malcolm Tucker is far from the most sinister thing in the film. The plot itself, about the lead up to an unjustified and most likely illegal war, has clear parallels to the real life Iraq war, from the gung ho Americans looking to ride out without real evidence to the British government kowtowing to the Americans’ wishes. The plot mechanics and circumstances, as ridiculous and funny as they are, are all too real. And that is what makes the movie frightening. That war can be started and justified, with no real evidence, so easily and without any sort of thought as to the “why”. It just is a fact: war is coming, and we need to manufacture the “why”.

The Thick Of It is a much more UK based show. It’s focus is on a specific government department, though the later seasons spread out a little more. In The Loop has much broader aims, and as such, is a broader story. The Malcolm Tucker of the film is only a reflection of the full Tucker of the series, and its well worth your time to look up and watch all 4 seasons (it’s a total of 21 episodes, not that big of an investment.) But In The Loop is one of the funniest movies of the last decade, and I’m willing to be you’ll be quoting it for years to come.