The A-Z of Geek Cinema: L is for Les Miserables 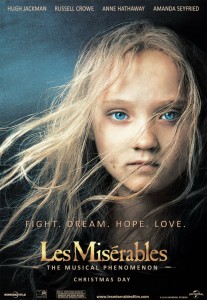 Tom Hooper is an Academy Award-winning director (for The King’s Speech in 2010). He’s directed television for HBO and the BBC, as well as numerous television commercials and some theatrical productions. So why does he shoot his newest film, the adaptation of the enormously successful musical Les Miserables, like a novice who’s been given his first camera and a budget?

I will lead this off right now with a confession: I am a huge fan of the musical Les Miserables. I was introduced to it when I was in high school through the 10th Anniversary concert that was run on PBS for years, and can pretty much sing 90% of the show from memory. (Oddly enough though, I’d not seen a live performance of the show until this past weekend.) I had my preconceptions of what things were supposed to sound like, and how the story goes, and know the story of the book, and the history of the adaptation, and basically everything you can know. So I didn’t go into this movie blind or unaware of the plot. As it stands, it was a good adaptation. The songs were somewhat edited, and a few were cut entirely, and for the most part the cast was phenomenal (Russell Crowe, on the other hand, was a terrible Javert [who is my favorite character.])

My problems with the film (outside of Russell and some issues with the characterization of the Thenardiers) were almost entirely with Hooper’s directorial choices and his use of the screen. Les Miserables as a story is a decade-spanning epic, full of emotion and fire, love and revolution; it demands sweeping shots, a grandeur that only major budget films can reach or even properly attempt. And there are a few moments in the film which approach this idea, specifically the very opening of it. But most of the film is shot in extreme close-up, or middle ground two shots, so much so that it’s already become a joke to refer to it as “Close-Up: The Musical”. This causes much of the film to lose its sweeping grandeur, and feel claustrophobic and choked. And for a film with theÂ  inherent “bigness” of this, that’s almost a killer. 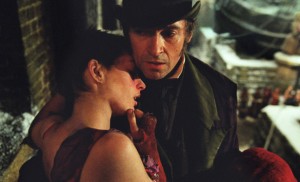 Luckily, the strength of the material itself, plus the actors, save the film from Hooper’s best efforts. The big talking point pre-release was Hooper’s decision to record all the singing live on-set, which is not normal for modern musicals (or most filmed musicals, period.) This decision was both a good and poor one, as it did result in some jaw dropping performance pieces, such as Anne Hathaway’s “I Dreamed A Dream” and Samatha Barks’ “On My Own”, but it also seemed to hamstring the shot choices, or at the very least, limit Hooper’s choices between “close-up” and “two-shot.” I’m not sure of the production order of the film, but I’d be willing to bet that Hathaway’s number was done early in the proceedings. Shot in one unbroken take, close-up, and handheld, the power and drama of the song shows on her face, every gasp and cry turning what’s usually a beautiful performance piece for a stage actress into something more devastating and broken. Her character, Fantine, has been destroyed by life, and we as an audience see that breaking in a single fantastic performance. 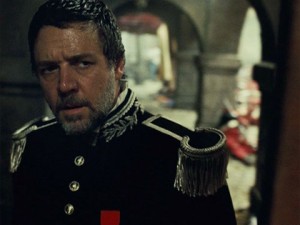 The problem is, every performance isn’t like that. Javert’s big set-piece, “Stars” (one of my favorite songs from the show), is shot so oddly that the decision to use a CG set was almost baffling. A song that talks all about the multitude of stars in the sky, that practically demands giant views of the night’s glory, is shot almost entirely in close-up or middle ground of Russell Crowe’s unemotional face and flat voice. It betrays the entire meaning of the song, and doesn’t add anything new to it that might justify the choice. It’s just… flat. More poor decisions: “A Heart Full of Love” ends with three people singing, Marius & Cosette in harmony and Eponine in syncopation, yet, despite there being innumerable ways to get them all in frame while displaying a visual idea of the conflict between them, is shot in three different intercut close-ups. I try not to second-guess directors while watching films for the first time, but it actively pulled me out of the movie. It was MADDENING.

So yes, the film succeeds on a performance level, though I feel all the power and emotion and goodness of the film is thanks to the spectacular music of the original show (though, as an aside, I didn’t like the new song written for the film, “Suddenly.” It sounded different from all the other songs, more “Disney-ish”, and interrupted the flow of the story too much.) Hooper’s direction seems to be working at cross-purposes the entire run-time. It’s worth seeing, but with a distinct caveat. So yeah, I hear the people sing. They’re singing the songs of angry men. Like me. At Tom Hooper.