The A-Z of Geek Cinema: J is for Jurassic Park 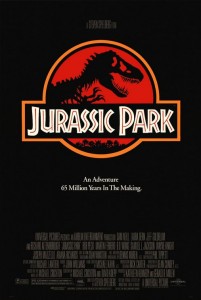 So, I try to make these columns about more than just “Holy crap, you guys, this movie is awesome.” I want to find a theme, a through-line, something to write about other than how much I liked it and wasn’t it cool when Batman punched that dude in the face and said something quippy and then whoa a shark popped out of the water and I was all like “OH MAN THAT WAS BALLER!” But, full disclosure here: this week’s is totally going to be like that. I am incapable of being super-rational about this movie right here, because it’s Steven Spielberg, it’s JURASSIC goddamn PARK, and there are DINOSAURS, and they are RUNNING AMOK. (For the sake of my own sanity and goodwill, we’re ignoring the sequels, by the way. Not that they’re terrible, they’re just both pale shadows of this film.)

Seriously, let’s take a second and appreciate how, on a base level, this movie just hits everything I liked when it first came out: Science? CHECK. Dinosaurs? CHECK. Genetic manipulation? CHECK. People getting messed up like, all over the place? CHECK. I’ve long claimed Fight Club as being the film that awoke me to the possibilities of film to be more than just an entertaining time, and conversely Jurassic Park was the film that showed young me, even more than Star Wars or Jaws, that movies are AWESOME. Think on it: an enormous screen with what seems to be living, breathing creatures from 65+million years ago, stomping around, eating people and menacing them at all times. Spielberg tapped into some primal fears with this, with the assistance of the Michael Crichton text he drew from. The scene with the broken down jeeps in the rain, when the T-Rex breaks through the fence? That just shows a complete mastery of the formal language of both film and fear.

What most impresses me now, to be honest, is a two-fold experience. Firstly, how well-paced the movie is. It just MOVES. There is little wasted time, it’s all momentum and forward progress. It’s not a perfect screenplay (though I’d argue it’s much better than the novel, which I liked quite a bit but seemed a little meaner), but Spielberg keeps everything so tight and crisp that there is no time to dwell on small inconsistencies or plot holes. Everything is about going FORWARD, onward, to the next plot mechanic, the next set-piece, the next dinosaur attack. 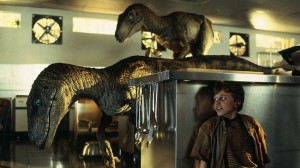 Which brings me to my second point: the special effects hold up amazingly well. In a current climate where almost anyone with a sufficient computer set-up can do CGI effects on the level of a low-budget Hollywood film, the miracle of this movie might be overlooked. But it really is amazing how REAL everything looks. And that’s because much of it is. The mix of CG and animatronics provide the weight of reality that all-CG films can’t match. Nothing beats the physicality of actually being there. It’s almost 20 years since it came out (holy crap, I’m old), and the dinosaurs look as real now as they did then, when such effects were unheard of. Just look at the scene with the raptors in the kitchen area hunting the kids; the puppet-to-CG transitions are pretty much seamless, and don’t have that weird glossiness that infects a lot of CG films now.

This is all not to say that the performances suffer in comparison, but let’s be honest: as much as I like Jeff Goldblum being Jeff Goldblum all over the place (“So there uh, there will be uh, dinosaurs on this dinosaur tour, yes? Yes, hello?”), and as great as Sam Neil is as Dr. Grant, anyone who came to see this came for the dinosaurs. And for me, who was still in a decades long obsession with the Triassic, Jurassic, and Cretaceous periods at that point, it didn’t matter who was in the film, I wanted to see them all get snacked on by Tyrannosaurus Rex. But not that raptors. Those buggers were scary bastards.