The A-Z of Geek Cinema: H is for Hellboy II: The Golden Army 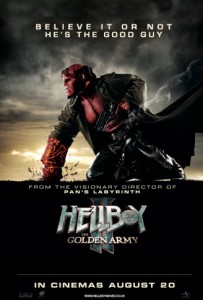 The Hellboy films of Guilermo del Toro bear increasingly little resemblance to their source material as they go, and this, I feel, is for the better. They show all the hallmarks of del Toro’s signature style, a mix of fantasy and horror, with nightmare imagery and dream logic combining with his love of the gross and macabre, and his normal obsessions shine through, even more than creator Mike Mignola’s do. Del Toro’s oeuvre has a distinct feel to it, a bent towards stories about family and the protagonist’s place in the world. Hellboy II: the Golden Army is no exception.

If the first Hellboy film was about fathers and sons, Hellboy II is about what comes after, about what we do and what we leave behind. Legacies figure largely into it. The main plot is all launched because of an ancient pact between the human and elven people, which humanity has long forgotten. The titular army lies dormant, the legacy of the elven king, locked away with the key broken up and hidden. His other legacy, his son, seeks to unleash the automata on a race that he feels has broken the truce and begun encroaching on elven lands.

Meanwhile, Hellboy himself is struggling with his place in the world. He lost his “father” in the previous film, and rankles at the attempts of his superiors to keep him in line. He seems almost defeated, unsure of himself and his world, not to mention of his status with Liz, his love. When he reveals himself to the world, breaking the previous veil of secrecy around his existence and that of the BPRD itself, he pushes even harder at his perceived walls. He’s struggling with his own place, his own legacy, caught between the human and the fantastic. He’s on Earth for a reason, he just doesn’t know what it is. The elven prince, Nuada, brings that struggle into sharp focus when he unleashes a forest elemental, one of the last of its kind, to fight Hellboy & his team. He seems to be pushing Hellboy toward some point, but to what end? Even if Hellboy chooses to embrace his demon/fantastic side, it does not stand to reason that he’ll join Nuada in destroying humanity. 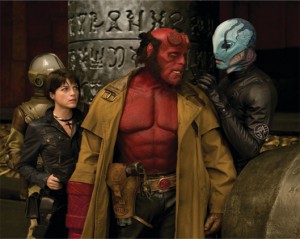 Further embodying this theme is the dilemma of Liz Sherman, Hellboy’s girlfriend/lover. She’s been trying to get Hellboy to mature, to act more like the leader and man she knows he can be, but he prefers his state of arrested development. Her reasons are unknown until Abe Sapien accidentally discovers that she is pregnant. So, Liz faces an even more immediate question of legacy, as there is little to know of her and Hellboy’s children, what they’d be, or even how to care for them. If Hellboy refuses to face the issue of the future and his place in it, how can she expect him to handle the news of his progeny?

The idea of legacy carries through the whole film, until the very end. After being stabbed by Nuada, Hellboy is brought by Liz & Abe to the Angel of Death, who knows of their coming and has been waiting. He flat out tells them that if Hellboy lives, he dooms humanity, as he is the Beast of the Apocalypse, and that Liz will suffer the most. Defying fate, and finally telling Hellboy that he’s going to be a father, Liz saves his life, and gives him a reason to live. At the end of the film, all the members of the BPRD have quit and are going on their own, without government oversight. And the legacy of Hellboy is still uncertain, as is the future for them and their world. But they’re all facing it together, with the knowledge that maybe fate is unavoidable, but that if it’s their legacy to change it, they’re going to do their damnedest.