The A-Z of Geek Cinema: G is for Ghostbusters 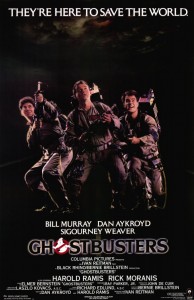 Chemistry can be a funny thing. All it takes is the right combination of elements, and you have something new and wonderful on your hands. Film is no different. You can have the two best actors in the world, in a film written and directed by supremely talented individuals, but if that spark, that ineffable “it”, is missing… well, you might have a problem. I’ve written before on how delicate chemistry in film can be. In fact, just reading through some past A-Z entries will show that. And I can think of no better example of how much chemistry can effect a film than the hit 1984 film, Ghostbusters.

You’ve seen it, of course. Everyone has. And if you haven’t, FIX THAT RIGHT NOW. Seriously. It isÂ  one of the funniest movies ever made, featuring Bill Murray in the midst of his first great run of film roles, Dan Ackroyd before all the problems, and a skinny Harold Ramis (which, nowadays, is as rare as a great white elk.) The genesis of the film was long and full of as many twists and turns as the film itself; originally written to star John Belushi, Eddie Murphy, and John Candy, it was as different in tone and scope as Star Wars is from Lucas’ original draft (ie. a lot.) It involved time and dimensional travel, multiple teams of ghostbusters, and a large number of huge ghosts (the Stay Puft Marshmallow Man was just one of many.) Belushi died during the writing of the eventually pared down screenplay, and the other two wouldn’t commit, so it went through more development and settled on the cast and form it appears in now.

The casting of Bill Murray was the big coup, of course, as he almost singlehandedly makes the film. His loose, laconic, and somewhat improvisational stye completely fit the character of Peter Venkman, and the movie made him an even bigger star than he already was. But Murray wasn’t the only bright spot; Ackroyd, Ramis, Ernie Hudson, Rick Moranis, Sigourney Weaver, all amazing actors playing perfect roles. The scif/horror elements and the comedy blended perfectly, thanks to the direction of Ivan Reitman, and the effects work was great, combining post-shoot optical effects with in-camera tricks and physical puppets. It was a huge hit, and is rightly remembered and referenced with reverence today.

So why didn’t the sequel work? It was the same cast, same director, same everything. Yet Ghostbusters 2, while cute and fun in a largely inconsequential way, is not in any shape or form close to the quality of the first film. A plot which seems to double back on itself and actually makes little to no sense when taken with the end of the previous film, featuring a somewhat disinterested performance from Murray, it is redeemed only by what is a fantastic villain: Vigo, the Scourge of Carpathia, the Sorrow of Moldavia. But again, WHY didn’t it work? Too many cooks dropping their opinions in? Perhaps. Attempting to do exactly what the first film did without advancing the concept or doing anything significantly different? Maybe.

There has been talk of a third sequel for YEARS. It’s gone through multiple rumored drafts, casting suggestions, and plot synopses. Ackroyd seems to be the one pushing for it more than anything. In fact, Bill Murray has flat out said he won’t do it unless the script is of better quality than the last film; he seems to be embarrassed they made the second film at all. Now, the studio and Reitman have both made noises and moves which seems to indicate it will be aÂ  “go” picture as of next year. This… well, it seems like a mistake to me. You need to either have a fully invested and onboard Bill Murray for it, or you need to not make the picture.

Do you hear me, Columbia? DO NOT MAKE THE PICTURE. The chemicals will BLOW.