The A-Z of Geek Cinema: F is for Fight Club 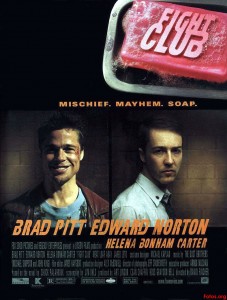 “How much can you know about yourself if you’ve never been in a fight?”

The cult of Fight Club is not one that sprung up over night. It was small at first, restricted to those who’d read Chuck Palahniuk’s book. As the movie’s release approached, more people picked up the novel and hipped to the vibe Palahniuk was throwing. As the late ’99 release came and went with little fanfare (and even less box office), there was some noise made by critics about the violent images and content, and the nihilistic and anti-capitalist themes, but it was all ultimately whispers in the wind, as not enough people saw it to make even a small dent in the public consciousness. But then…

The idea of a “cult film” is interesting to me, because the word “cult” has a negative connotation, while “cult film” generally is used in a slightly positive respect. A cult film is one who was under appreciated in wide release, or maybe never even got a wide release, but was subsequently discovered in aftermarket showings and on video; movies like Rocky Horror Picture Show and Evil Dead are great examples. Sometimes, a cult film remains that: one fiercely loved by a small group of devotees. But sometimes, like in the example of the first Austin Powers film, it gains such a spectacularly large following that a sequel occurs. Fight Club is more the former, but its influence and simple penetration into the zeitgeist is more than anyone could’ve predicted after its failure on first release.

So, WHY FIght Club? What about the film engenders such a strong reaction, both positive and negative? I don’t know if there’s enough time left before the heat death of the universe to explore fully why anything does or does not work, but with Fight Club there’s some really obvious answers here as to why some people have gotten so attached to what is, at its core, a very dark and nihilistic film. For the more physically minded set, the fighting is very visceral and realistic. People get DESTROYED in this film. And while it starts as fun, the film itself decries it eventually, showing the end point of such impulses and actions. One needs look no further than the “Jack”/Angel Face fight to see the sickening impact that the violence has on both the characters’ physical forms (Angel Face’s destroyed features) and psychological states of well-being (“Jack”‘s ennui returns, as the fighting is no longer an outlet, just a habit.) There was a rash of actual fight clubs (a concept which Palahniuk has said he made up for the book, though its possible something similar existed beforehand) that popped up in the wake of the film’s release, which lead to a few sensationalistic news stories about the phenomenon. Though, as it’s often said about the film, the fighting is often secondary to the philosophical points its trying to make. Some people missed the memo, I guess. 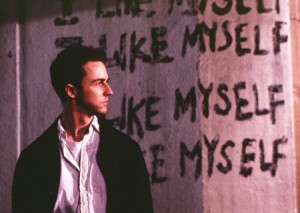 More often, the ideas of the film are what people latch onto, the exploration of the post-millienial ennui and aimlessness that permeates American culture. A generation of overeducated and underemployed individuals who were promised that hard work and schooling would lead to wealth and success finding that all the work and school in the world can’t fill the emptiness inside. The idea that “the things you own end up owning you”, the crass materialism on display in everyday life, this is what the film seems to be fighting in truth. It advocates what is essentially corporate terrorism and anarchy, through pranks and small acts of rebellion against the societal structures that confine us. But even that is a swerve, as later in the film, it shows how this idea is childish and leads to literal cult behavior and proto-fascism, and has an ultimate end point in pure and unadulterated anarchy.

So what is Fight Club about, really? The above stated points are all valid, if limited, but ultimately, it’s about human relationship and love. The case is easy to make that the emergence of Tyler and the starting of everything that drives the plot forward, while a product and endpoint of the pressure “Jack” feels throughout his life, is ultimately catalyzed by his meeting Marla. The final shot of the film, “Jack” and Marla holding hands, dead center frame, turning to look at each other as they’re silhouetted against the literal collapse of the financial district behind them. “Jack” has filled his life with work, with objects, with ideas and fights and cult members, but the thing which broke him down and made him realize what was wrong was love. Or something like love. After all, how much can you know about yourself if you’ve never been in love? 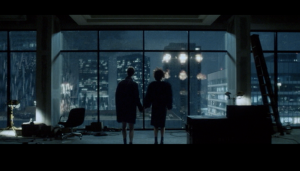