The A-Z of Geek Cinema: N is for No Country For Old Men 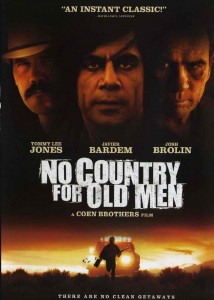 The silence surrounds you, the stillness unnerving. It’s only when music rarely comes in that you notice how often it’s not there. Everything is on edge for the duration, moments of violence punctuating the prolonged quiet, the flow broken by jagged edges of visceral experience. The Coen Brothers’ adaptation of Cormac McCarthy’s No Country For Old Men is hailed as a masterpiece, one of the best films of the young millennium, and possibly their best period. And justifiably so.

The Coens are known for their wordplay, for the mannered and specific dialogue, so it was surprising that they would choose to adapt an author known for his spare prose, and lack of quotability. McCarthy’s novels traffic in feel, in mood, and his writing style is very… empty isn’t quite the right word, but it’s close enough. And the brothers take that to heart, making the film very still and empty as a result. Their camera, usually a steady impartial observer anyway, becomes almost more remote, as if they were shooting another planet from Earth. Most of their films have a wry sense of detachment, a level of remove from the material, which is nowhere to be seen in No Country; McCarthy’s narrative defies irony and archness, becoming all about the loss of innocence (or supposed one, anyway), and of consequence of one’s actions.

Much in the same as the Coens’ previous films Blood Simple and Fargo, themes of consequence and fate emerge and merge through the narrative, one which is somewhat simplified from the source novel; the book featured more backstory and narration from Sheriff Bell (Tommy Lee Jones’ character). In the absence of this grounding in the mundane, the narrative trends more towards a black-and-white morality tale, but one without any central “good” characters. Our ostensible protagonist, Llewelyn Moss (Josh Brolin), brings all the problems and death he encounters upon himself, a point which Anton Chigurh (Javier Bardem) points out. Chigurh himself appears almost as a more than human character, one above pride or anger. Defined by the Coens as being in the “Unstoppable Evil” archetype often found in their work, he has a moral code, though it is often inscrutable and seems based on the idea of chaos vs order. 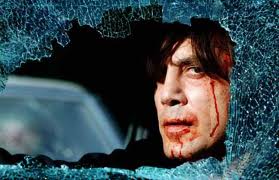 The movie itself is almost obsessed with this idea of order vs chaos as well, as the silence and stillness attest. The lack of music throughout the film plays up the emptiness of the world, of the unjudging and often unjust cosmos. (There’s only a total of 16 minutes of “score” in the film, much of it over the closing credits.) This unfair world plays into the narrative itself, as Moss, whom the audience has followed for most of the run time, is killed off-camera and by someone completely unrelated to Chigurh, thus robbing the audience of the expected “stand-off” that was sure to ensue. It’s then discovered that the actual protagonist of the film is Sheriff Bell, one of the titular “old men.” This is no country, no world, no universe for a good person. Though, as his father tells him, it’s always been so. The world is cold and unfeeling, and the most men can do is shout at the darkness.