The A-Z of Geek Cinema: B is for Blade 2 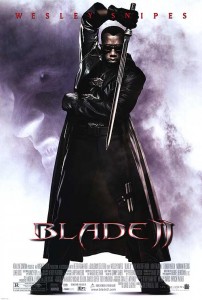 The Grand Guignol approach to horror is an approach that has to be taken all the way, or else it will fail miserably. You either have to do your utmost to disgust and horrify the audience, or you risk turning off both those who crave the grotesque AND those who hate it. There can be no half-measures. And there is probably no more lauded and high profile director working today who knows about this than Guillermo del Toro. While all his films to one extent or another deal with the fantastic, to varying levels of disgustingness, there’s one to which he seemed to have an unmitigated glee throwing in all manners of grostequerie, solely because he could. And that’s Blade 2.

Being a sequel, del Toro doesn’t have to worry about setting up the titular character much, so he can get right into the over-the-top fun and grossness of Nomak, the antagonist for the majority of the film. The first of a new strain of vampires, he is virulence made flesh, constantly hungry, literally burning up with the need to feed. And the apparatus to do so is much more disgusting and graphic than the normal “oh look, fangs” style. Closer to the idea of Dracula in the original book series, but taken ever farther, his jaw literally splits in half, and exposes a large star-shaped protuberance, which latches on to the victim and pulls them in. And unlike the dainty and “romantic” transformation of a normal vampire, the victim is in agony, the virus raging through their system, changing organs and mutating them into almost a replica of Nomak himself. And all of this is shown in graphic detail, worked out to the smallest degree, by del Toro. 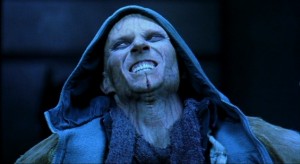 Everything about the vampires in the movie screams “decadence”, which is a natural hold-over/evolution from the first film. But what’s new is the weirdness of Damskinos, the head vampire and (SPOILER ALERT) Nomak’s father. He looks almost like he is made of brittle marble, like he could fall over and shatter at any moment. He eats jellied blood, as he apparently has trouble with the natural stuff, and bathes in pools of blood in order to stay functioning. He is the downside of immortality made flesh. Oh, and he keeps a room full of vampire embryos in jars. Because, in order to be a Guillermo del Toro film, there must be fetuses in jars. It’s actually in his contract. 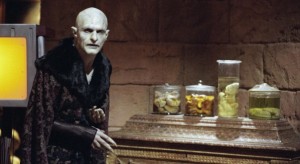 On that same note, you can see del Toro’s touch everywhere in the film. The focus on the anatomy of the newer vampires, the very comic-book panel frame composition (there’s even a visual quote to Doctor Manhattan’s disintegration panel from Watchmen years before the movie adaptation), the presence of Ron Perlman… all signifiers of del Toro and his filmography. This movie would have happened without Guillermo. The first one was a mild hit, and superheros became de rigueur in the years in-between. But it would NOT have been near as much fun, nor near as interesting, without del Toro’s involvement. One can only look at the third sequel to see that much is true.