The A-Z of Geek Cinema: A is for Adaptation. 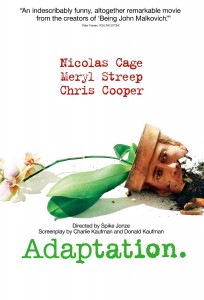 Sitting at a laptop, Nicholas Reed types feverishly, strain and exhaustion from lack of sleep showing in his sunken eyes. “I must finish this,” he thinks, “deadline is today, and I don’t even want to THINK about what would happen if I miss it.”

FOCUS IN ON THE WORDS:

Charlie Kaufman’s Adaptation is a fantastic work of… well, adaptation. What’s even more astonishing is it is almost completely fictional, and metafictional, while at the same time being a true-to-life story of his struggle to make the very film you’re watching work. Based around Charlie Kaufman writing an adaptation of Susan Orlean’s The Orchid Thief, it

“STOP STOP STOP, oh god, I can’t do all this plot recap again. That’s the cheapest way to pad word count and take up space.” Nicholas threw up his hands in the air and walked away from the laptop. Circling the kitchen, avoiding the cats and dog who are expectantly looking up for what they can only assume is some more food, he looks through the cabinets for something, anything, to distract. “Ugh, I need Doritos. RICHARD! WHERE’S THE DORITOS?” A small voice comes from upstairs, “You ate them all, Nick.”

The most genius part of Adaptation (and there’s quite a bit of genius about it) is that Kaufman solved his problems with adapting the unadaptable by making the film about the act of adaptation. In doing so, he ended up writing a film about the rigors and problems of the creative process, and showing the non-creators out there how difficult it can be for someone who creates for a living. Nicolas Cage is fantastic in the dual role of the sad sack, perpetually stressed “Charlie Kaufman” and his more vivacious and naive brother, Donald. Except, contrary to everything I’ve said about the movie yet, Donald doesn’t exist. 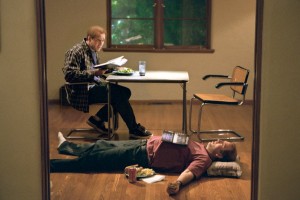 Richard reads over what’s been written so far. “Well, where do you go from here? I mean, you’ve talked about the central twist of the film already. You’ve mentioned its main purpose. You’ve got nowhere to go with it, really.” He looks up from the screen, at Nicholas pacing the floor, his eyes darting all over the place. “I don’t know, man! It’s like, I have this idea in my head of where I want this to go, but every time I try to get the words out, they float away. Like… tears in rain.” Richard rolls his eyes. “That’s Blade Runner, you asshole. Just stop puttering around and write. It’s not that hard. It’s just stupid words about a stupid movie. Pfft, not even ONE mention of the last act yet.”

The invention of Donald allowed Charlie the freedom to invent… well, anything. And so he did. He created a third act more adventurous than one in the book. In fact, it’s one almost straight out of a boilerplate Hollywood action thriller. Exactly like Donald talked about earlier in the film, in a suggestion to Charlie on how to end the film. And its one in which Donald dies. Charlie Kaufman created a brother for his movie only to kill him off. The actual screenplay, nominated for an Academy award for Best Adapted Screenplay, was credited to Charlie & Donald Kaufman. So the question then remains: where does the film end and reality begin, and vice versa?

TIRED OF THIS YET: 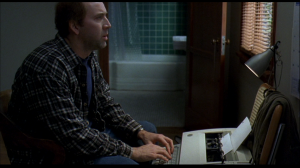 “I’m going out for cigarettes, Nick.” Richard closes the door, as Nicholas sits in the darkness, lit only by his computer screen. “There’s got to be something more here. Something I’m missing. Adaptation. A trait with a current functional role in the life history of an organism that is maintained and evolved by means of natural selection. Things change, people change, times change. We adapt. We move forward. Why do we adapt? Because we have to. But what does this MEAN?” Nicholas stands up and moves to the window. A light rain is falling, the yard overgrown. A cat winds its way through his legs. “I don’t know. I don’t know anything. I don’t have an ending. I can’t just stop it, can I? What does that say?”