DC Comics held a live event from WonderCon last Saturday discussing the publisher’s the newest initiative, Rebirth. If you didn’t catch the event live, you can watch it anytime, here. While plenty of news was made, here are 7 Takeaways From DC Comics Live Rebirth Event.

Jim Lee joked at the beginning of the event that this was their first live event broadcast — and hopefully not their last. It was a joke, sure, but I really do hope that we see more live events.

#Rebirth was actually trending on Twitter. Everyone seemed to be interested in the announcements being made and eager to find out who would be the creative teams behind the books they love. It was a fun experience for those who followed it live and hopefully we see plenty more like it. 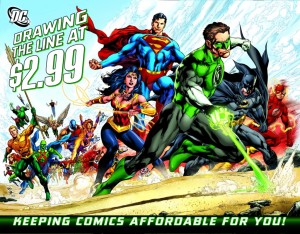 But they’re recommitting to the concept, beginning with ‘DC Universe: Rebirth Special’ #1 by Geoff Johns. That’s right, the oversized 80 page issue will debut on shelves for just $2.99! This is a sign of good faith by DC and is something that budget weary readers can appreciate as Rebirth rolls out a sleight of new titles.

5. A Rollout That Makes Sense

DC has a bad habit of coming on like gangbusters. Featuring a slew of new titles, typically debuting all in one month, that overwhelm readers and retailers alike. Rebirth brings about a much smarter rollout plan. More akin to that of the All-New, All-Different MARVEL rollout last year, the Rebirth titles are going to slowly release over the course of the Summer. 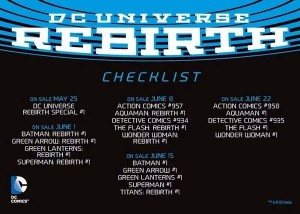 Each series will feature a special one shot issue to setup each title, a really great way to allow readers to get a taste for each book before plunging into the series.

4. A Terrific Blend of Veteran And New Talent

It’s hard to secure top talent. This could be for any number of reasons, key among them being the number of creators trying their hand at the the independent comics scene. This makes securing top talent all but impossible. The recent DC You initiative sought to bring in new creative talent to fill this void. The trouble was that too many of the titles featured creative teams that brought almost no name recognition whatsoever. A balance is necessary between established talent and fresh voices to foster maximum creativity.

Along with the initial Rebirth announcements, Geoff Johns talked about the importance DC Comics returning to legacy and he talked about again here. I was so particularly enthused by his comments, even prior to the event, that I wrote a whole article on it. Here’s just an excerpt.

Legacy. A trait long absent from the publisher housing the most heralded characters of the entire comic book industry. Legacy, being the ignored rich history of The New 52. Legacy, being the integral missing component of the failed DC You initiative. A Rebirth, the return to legacy.

They’ve worked hard to breathe new life into The New 52, but nothing has worked. This is why it is so important that DC does Rebirth now. Go back to what worked, fix what didn’t, and bring legacy back to the DC Universe.

I can’t wait to check most of these books out. I’m maybe the most excited for, ‘All Star Batman’ by Scott Snyder, John Romita Jr., Jock, and Sean Murphy. I’m also really looking forward to Dan Jurgens continuing his magnificent ‘Superman: Lois and Clark’ run with Action Comics #957. Geoff Johns elevator pitch for ‘Teen Titans’ and ‘Super Sons’ both sounded really solid as well. 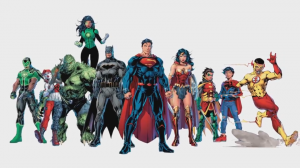 Really strong looking lineup altogether. Personally, I am going to have to try out at least half of these titles and sort them out from there. Not the preferred model to go by, but they all look really, really good. How can I choose?

1. They Listened To Us

This is the single biggest takeaway from the Live Rebirth Event. Mark the calendar, they listened. Just as the event came underway, Co-Publisher Dan Didio said something that really stuck out. 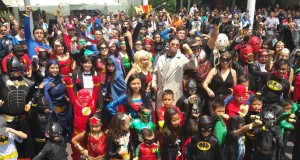 Fans often become critical of the decisions being made with the comic books they love. But this isn’t the comic industry’s unique disposition… The same holds true for just about everything, ranging as far from professional wrestling all the way to politics. Thanks to the internet, we live in the official age of second guessing and hindsight, perfectly caricatured with memes and gifs. The internet casts everyone as being either arrogant or clueless and sometimes even both. And that makes it really hard for everyone to sort out just who exactly they should be listening to. And this is especially true for the comics industry. Because the editors and publishers can no longer discern legitimate complaints from the mindless nitpicking, it has become almost as if our voice doesn’t even matter.

But we continued to speak out. And it turns out that someone was actually listening. DC has admitted their mistake and is working to retool their brand closer to what we’re looking for. At the end of the day, our voice actually mattered. We made a difference. And how special is that?