New Super Mario Bros U is the 4th game in the “New Super Mario” series, and once again sees Mario and cohorts on an adventure to save Princess Peach from the clutches of the evil Bowser. 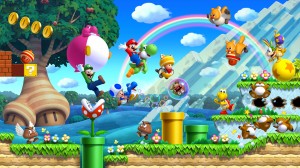 Review 6 (out of 7) – The New Super Mario series may be lacking in appealing graphics to most, but they remain extremely solid platformers. The inclusion of Boost Rush Mode, Challenges and Miiverse also extends the life of this title. A must-have if you own a Wii U.