Sometimes you try to answer questions that you were never really asked. While I’m a fan of new releases in entertainment, I also divert a lot of my time and attention to older products. Movies and games from generations pass or trying to fill out my comic reading history and the likes.

I’ve always wanted to share my thoughts on these things, but never felt it was necessary to add some 500 words on a subject that people have probably dissected in every interesting manner beforehand. Over the past week or so though, I’ve been stuck on this idea again and with the site adapting “7” as our unofficial number, ideas began to form in my head.

Introducing 7 and 7 Reviews. The gist of it will be a more short-form review thatÂ highlightsÂ 7 core aspects of a product and how it adds up to the overall experience. Much like our reviews, we will also score these out of 7, hence the 7 & 7 title. As always, it is a work in progress so it will most likely go through some changes and modifications until we’re happy with it.

To kick it off, we’re going to look at Smokin’ Aces, a film from 2006 that I wanted to revisit because I owned an unopened DVD of it! 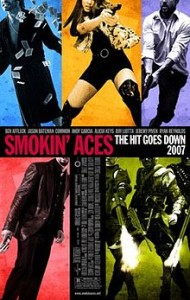 Score 3 (out of 7)– There’s just not enough substance here to sustain a quality movie even though they beat you over the head with exposition!