Horror Hangover continues to rock and roll. This week, I checked out the latest entry in the “Child’s Play” series, Curse of Chucky. This film has taken quite the curious release path, first releasing as a digital movie on iTunes, and just this week as a DVD/Blu-Ray home release.

It’s release course aside, how was “Curse of Chucky”? Let’s find out. 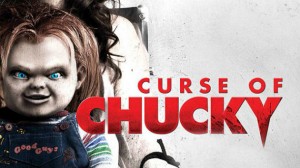 1)Small and Bright – This is a DTV (DTS?) movie and it shows. But the limited budget may have helped the film’s pacing and appearance. Taking place roughly in a single night, this compact story-telling really does benefit the franchise and the world set-up.

2)The Humor – Depending on your taste, this could be a plus or minus, but it drops most of Chucky’s trademark humor and makes for a much more frightening experience.

3)Awful Human Beings – This is always a problem in horror/slasher films for me, when I actively want some of the main cast to be killed off because they come off as just awful human beings. There were a handful on display here, though just as many to rally around.

4)Twists and Turns – This movie turns you on your head several times. I love that it played with our expectations and left me guessing… and even hoping for a sequel.

5)The Look – I was pleasantly surprised by some of the good looking shots in this film. They did a terrific job of setting the mood for certain scenes (there is a Chili scene that is oddly compelling in here) and one of Chucky descending on his foe that’s pretty nice.

7)The Kills – One thing I love about a good slasher is creative kills and gruesome deaths, this film really lacked any of that. There wasn’t a single stand-out kill in this entire movie, and they had the setting and characters for it. What a shame.

Review: 5 (out of 7) – This was a nice return for the series. I honestly wasn’t expecting a ton out of the movie after the last two films, but now I’m asking for a sequel. .I think worth checking out.