Have you ever wondered how your favorite heroes spend the holidays? I know we have! And over the next few weeks, we shall take a look at how different nerdcons celebrate the holidays through various mediums. Today, its the comic book and super heroes!

Let’s start with The Caped Crusader, The Dark Knight, Batman.

Batman like any grown man who enjoys beating people up, spends the early part of his holidays getting in tune with nature:

Who doesn’t love wrestling with a bear in a Christmas tree? That’s my personal tradition anyhow!

After wrestling bears, Batman of course returns to Gotham City to bust up any gangs and mobsters that formed in his absence:

After that, because Robin insists, they put up the Bat-tree

Of course the tree is equipped in the latest and greatest in home security, Batman doesn’t even trust the real Santa Claus!

Christmas Eve becomes even more of a chore for the Dark Knight:

There’s the Justice League/Hall of Justice Christmas Party. You do not want to see Wonder Woman drunk! And her costume is already pretty revealing!

Somehow this usually turns into an annual superhero snowball showdown. Even Batman can’t prepare for the speed of the Flash or whatever crazy device Green Lantern comes up with!

One year, Jolly ole Saint Nick joined the fun and became an honorary member of the Justice League… his memory was then erased by Zatanna before he left….

Batman then returns to the Batcave, where the Dynamic Duo do their best Santa Claus and deliver toys to the wonderful kids of Gotham… while gathering intel on their parents and possible mob connections. Yeah, little Lucy enjoy your new doll, your daddy’s gonna spend 10-15 behind bars!

And Bruce invites over some of his closest friends, and while it may look like he is dressed in his Batman guise, its actually his Bat-pajamas.

This started out being about various characters, but there were a lot of Batman covers/images so went with that, hopefully next time we’ll cover more people! 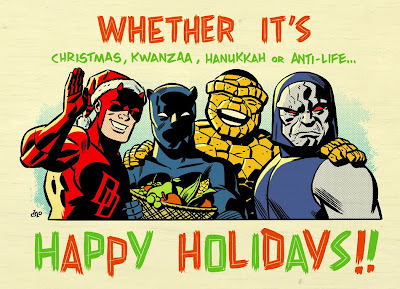