I got to say these titles will be extra special this month since they have an added header to them! Nothing like a long winded title to get the juices flowing, right?

Anyhow, as we posted on the first day of our 25 Days of Christmas, part of this month will be dedicated to watching movies under our various holiday drinking rules. Unlike the traditional 151 Proof Movies though, not all of these need to be bad films. As a matter of fact, the idea is to watch enjoyable flicks as a reward/break from the long year we just had.

So many of you may be questioning why we started off with Jingle All the Way, well as they say, old habits are hard to break. Think of it as a transitional movie. It isn’t as bad as some of the other stuff we’ve seen, but when it comes to Holiday movies you can obviously do much better. 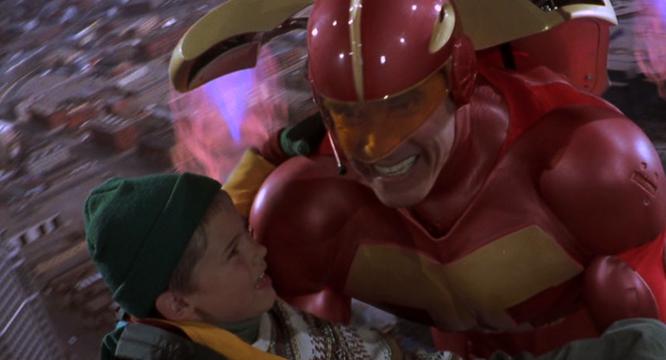 I won’t bore you too much with the details of the movie. I assume for the most part people know the general gist of the story. A father who is too busy for his family during the holiday season must rustle up to find the hottest toy of the season on Christmas eve. A lot of hijinks ensue, and everything is resolved so neatly!

I will never really begrudge a Christmas movie for being predictable or sappy, I mean for the most part its why we watch these movies. They fill us with joy and the spirit of the holiday. And I have to say I really did enjoy this movie for the most part. Honestly, the biggest mark against this movie is Sinbad’s “acting” if you can call being loud andÂ obnoxiousÂ acting anyhow. I mean whenever he was on the screen, it just made me cringe, but other than that I enjoyed the movie. The gags were fun, it was an interesting commentary on the evils of holiday shopping (we ever had a story out this year about a woman using pepper spray on Black Friday, much like a character in this movie), but it does have its heart in the right place.

This is a prime Christmas movie to watch with our Christmas drinking rules to be fair. Almost every major scene features a Christmas song to some degree, so plenty of mileage there. The reindeer rule is in full effect throughout the movie with both a real reindeer on display and a scene where our main characters repeats all 8 names like 4 times (that was a poorly planned rules in hindsight!).

For a bit of an added kick for this movie, I would also recommend taking a drink whenever they say Turboman in the movie. Trust me, you’ll be fine!

All in all, I think Jingle all the Way is a fun little Christmas movie, made all the more enjoyable by using our specially crafted drinking rules!