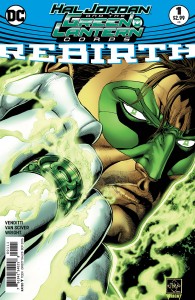 The Green Lantern Corps are still missing while the Sinestro Corps are the only “protectors” of the universe. They have moved to Space Sector 0, which is where Oa was once located, and plan to keep the universe in order. The green light of will is still active in an unknown area of space, unknown to Sinestro and his yellow lantern corps. Hal Jordan trying to harness all of his will in order to help bring freedom back to the universe and find his friends to restore the might of the Green Lantern Corps.

Hal Jordan is being “Rebirthed” again. This time it’s not bringing him back to life but making him a hero again. The end of the New 52 Hal pretended to be rogue to help restore faith in the Green Lantern Corps. How is going to become that hero was not discussed in this issue. This issue was a stepping stone merely setting up the story ahead. Who the enemy will be going forward is not known. Could it build toward a Sinestro Corps War II? We have no way of knowing exactly what is a head other than Hal is back and Sinestro is in his way.

Overall, the issue is the re-rebirth of Hal and shows us that his is one of the most powerful Green Lanterns to ever wear the ring. Where this series is headed remains to be seen, which is a bit of a letdown. The art is always a big part of Green Lantern comics with all of the colors and uses of them, and that continues here. I have hopes that we will get some great Sinestro and Hal moments in this book, and that is enough of a reason to continue with the series.