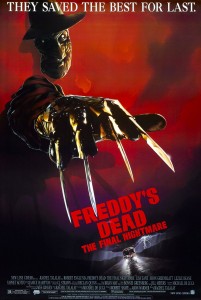 How did it all go so very wrong? After the critical and commercial failure of The Dream Child, New Line Cinema decided to make the sixth Nightmare on Elm Street the last, but the resulting film is an affront to what is often heralded as one of the most creative and influential horror franchises. From start to finish, it is a misguided mess, and difficult to enjoy in any capacity.

Freddy’s Dead is set eight years in the future, when Freddy Krueger has successfully killed every child, save one, in the town of Springwood, Ohio. As you might have guessed, the one remaining teenager, who is only referred to as “John Doe,” is our protagonist, and the film wastes no time pitting Freddy against him. In an elaborate sequence that seems to last for 17 hours, John is hounded by Freddy, who at one point appears as the Wicked Witch of the West, taunting John that he’ll get him and his “little soul, too!” So we’re off to a great start.

Freddy eventually catches up to John and throws him through an invisible barrier at the border of Springwood, causing John to hit his head and develop amnesia. Unable to cross the barrier, Freddy tells John to “go fetch” for him, and returns to his domain. John awakens in a shelter for troubled teenagers, where he meets a social worker named Maggie Burroughs and three, um… “eccentric” teens named Carlos, Spencer, and Tracy. Determined to help her new hard luck case recover his memories, Maggie drives John to Springwood, unaware that the three ne’er-do-well teens from the shelter have hidden in her van. 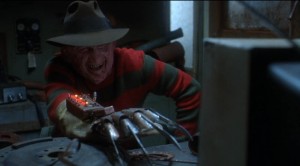 After discovering the stowaway teens, Maggie tells them to drive back to the youth shelter while she and John investigate the town. Living in a town with no surviving children, the remaining residents of Springwood (two of whom are played by Roseanne Barr and Tom Arnold) are more than a little touched in the head. It takes witnessing a school teacher instructing a non-existent class in “Freddy 101” for John and Maggie to realize that something is horribly wrong in Springwood, but they have already played right into Freddy’s clawed hand. Carlos, Spencer, and Tracy find themselves driving in circles, unable to escape Springwood, and take refuge in an abandoned house located at 1428 Elm Street.

Freddy attacks the teens one-by-one as they fall asleep in the former residence of Nancy Thompson. As was the case inThe Dream Child, the first kill in this movie is by far the best, with Freddy taking advantage of Carlos’ hearing impairment to replace his hearing aid with a living device that amplifies sound to the point that even the sound of a pin dropping onto the ground causes immense pain. Freddy torments his young victim for a while before scratching his blades across a blackboard, causing Carlos’ head to explode like in one of those old Gushers commercials.

Drug-addicted Spencer (played by a young Breckin Meyer with the most “90s” hair you’ll ever see) gets a far less glamorous death, being turned into a video game character and attacked by digital minions controlled by Freddy. As Freddy uses his glove as a makeshift Nintendo Power Glove, he exclaims, “Now I’m playing with power!” and it took every ounce of my own willpower to refrain from ejecting the DVD right then and there. Spencer’s death sequence is the worst part of the worst Nightmare film, and a truly embarrassing moment for everyone involved. 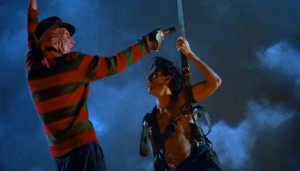 Freddy eventually returns his focus to John, and effortlessly kills him by dropping him from the sky onto a bed of spikes in a sequence that feels a little too much like a Looney Tunes cartoon. Just before John dies, Freddy admits that he was merely using John to get to his long-lost daughter so that he can use her as a vessel to escape Springwood. In a twist that can be seen a mile away, Freddy’s daughter is revealed to be Maggie, who had repressed all memories of her father. Driven by a feeling of responsibility to put an end to her tainted bloodline, Maggie prepares to enter the dream realm for a final confrontation with Freddy. When Freddy is finally, mercifully killed (with a pipe bomb of all things!) by his own daughter, you can only let out a sigh of relief that it’s all over.

Freddy’s Dead is a film that can be summarized with a series of “Why?” questions. Why is it set eight years in the future? Why is the plot so complicated? Why is there so much of Mussorgsky’s Night on Bald Mountain in the musical score? Why does Freddy’s origin have to be further expanded upon? I could go on and on, but the movie is frankly not worth dwelling on. New Line Cinema took a horror icon who represented a series known for its creativity and turned him into a non-threatening, cartoonish joke. At least Robert Englund seems to be having a genuinely great time, and his enthusiasm isalmost infectious enough to distract from the terrible quality of the movie as a whole.

There are very few positive things to say about Freddy’s Dead. I guess it can be mildly enjoyable in a “so bad it’s good” sort of way, but even then, it’s difficult not to constantly cringe at the bad one-liners, overwrought music, and celebrity cameos. Carlos’ death sequence was enjoyably creative, and I do have to admit that it was amusing to watch the characters awkwardly pointing objects at the camera during the climactic sequence, which was filmed in 3D.  You have to give New Line Cinema credit for one thing, at least: they set out to kill Freddy Krueger and absolutely accomplished that goal.

Best Kill: Carlos’s death sequence is fun and creative, beginning with an ear cleaning from hell and ending with a Scanners-style head explosion.

Genuine Scares: A brief glimpse of human Freddy’s “workshop” is the only truly disturbing part of the movie.

Rating: 2 (out of 7) – Robert Englund’s energetic performance does little to salvage this cinematic travesty.