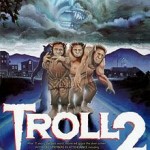 Time to kick off the 3rd Annual Beers n Fears here on Nerds on the Rocks. Unlike previous years though, we aren’t going to do blanket rules for the entire month. Instead focusing on individual movies as we do throughout most of the year. That doesn’t mean we won’t post a 3rd edition of the Beers n Fears rule though!

To kick it off this year, as with any year, we’re digging into the barrel of crap to bring you Troll 2. A film that comes highly recommended from our fans… which usually means it will be a painful night. Sadly, neither myself nor Swan have seen the film so we turned to our audience to help out with some rules!