This is slightly overdue, but we are finally getting to it. Like mentioned when first did the feature, would have someone watch the movie and play by the rules. Taking one for the team, I decided to watch Street Fighter: The Movie. Luckily it was my first time seeing it so I didn’t have to go in with too many negative pre-conceived notions, but on the same hand I wasn’t quite ready for the rules. I wanted to live blog the movie, but my laptop is a piece of crap and would have been a fight so here we are the morning after. I can tell you slightly feeling the movie, but let’s get to it. 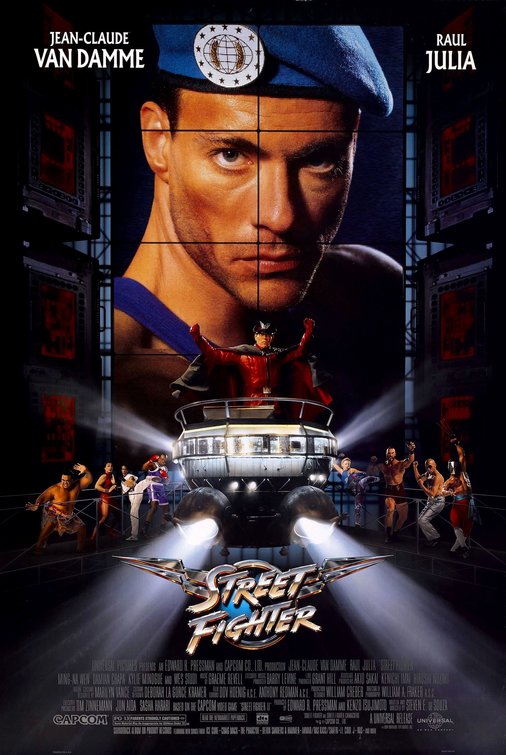 Full disclosure, I’m not the world’s biggest Street Fighter fan so that may play into this “review” a bit. I will say off the bat that I felt most of the characters were miscast, but Ken and Ryu got the EXTREME end of the stick. I mean I always imagined they were the hero of the Street Fighter universe (that isn’t the case in this movie) while in this film they are treated like second class citizens. Actually, that’s not true I wouldn’t mind if they had limited screen time. They are treated like idiots. I mean they are made to look like inept goofs throughout most of the movie, and it just hurts so bad.

The main two characters in this movie are Colonel Guile and I don’t want to say his name… I guess we might as well get into the drinking game at this point. One of the rules in the game was to drink every time the name Bison or Bisonopolis was mentioned. Let’s say this movie has a love affair with the name Bison. There is a section early on in the movie where his army chants his name for maybe 20 seconds or so. Let’s just say my first beer didn’t last long. Then it seems like EVERYONE refers to him by name even when he is in front of them. The “Bison” rule takes the nod for “Most Likely to Get You F’d Up” 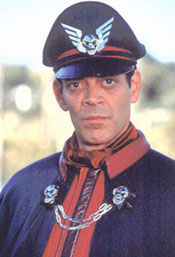 And it gets BETTER, not only is his name chanted and used repeatedly throughout the course of the movie, but it starts to bleed into other rules as well. During the SAME chanting scene above, we have a quip off between Bison and Guile, we have both of them delivering cheesy lines and of course Guile ends it with a random pose! Was not a good scene or I guess it was a good scene depending on your rules.

Then there is Guile’s infamous pump up the troops speech. Without seeing the movie, I knew about the speech so figured why not just jokingly make a rule about him saying home. I did not realize he would be saying Bison as well. All in all, the speech is about 2 minutes long and there are 10 uses of either home or Bison so once again the bottle never left my lips.

He hates you and your alcoholism!

And of course, they say home a few more times throughout the course of the movie. Then there is the cheesy lines/dialog/puns rule. This is a tough rule really since it comes down to personal opinions on what is cheesy. Let’s be honest here, most of this movie could be classified as cheese. I did however write down a few select scenes/quotes that fit the bill perfectly.

The first is a scene with Ken, Ryu and Sagat where they are put before a firing squad who then shoots nerf balls at them, and yeah….

Guile busts into Sagat’s little fighting arena with a giant tank (we won’t talk about compensation here!) and delivers this gem, “I’m the repo man, and you’re out of business”

Chun Li and her rag tag group, which includes E. Honda and Balrog (I Think?), have set an “explosive finale” for Bison and his goons as they enjoy a show. Yes, we took a preemptive for “explosive finale” because we knew it would eventually lead to cheese, which it did. Of course, that’s not the kicker for the scene. They have a car full of explosive roll down to the base and televise it. So Zangief, DeeJay and others watch on when Zangief gleefully shouts, “Change the channel!” Yeah, nice big ole drink for that one.

After thwarting Chun Li’s plan, she is captured and taken hostage or “personal” use for Bison. Meanwhile Bison orders E. Honda and Balrog to be tortured and killed, of course being this movie “They will talk, they will die” is the dialog used.

During the climax there are a ton of reasons to drink, Bison’s name, the poses, a few special moves, Ken and Ryu attacking like idiots, but the movie still fits in more. The first is a real judgment call but having something called “The hostage pit” which your computer announces is just BAD so drink up for that.

Then there is a fight between E. Honda and Zangief (I think, at this point some of the movie was just a bit hazy to me, not exactly sure why) and they just happen to be running a Godzilla movie at the same time in the background so of course you get those trademark sound effects. Yeah, you know it, drink up!

It should be noted that I watched this movie along with a friend (got to love modern technology and Netflix!) and his girlfriend made a judgment call for us to drink to Zangief’s costume during the finale. I can’t disagree with her.

There are a ton of drinks that were left out, but let me tell you all in all if you play by the rules, you will feel nice and toasty. And perhaps that colored my opinion, but I actually did enjoy the movie. Not saying I will ever watch it again, but it was a good time. I don’t think I need to use our review scale here since was practically using it, but I would say A Good Time with Friends was the ranking/my level of drunken enjoyment. 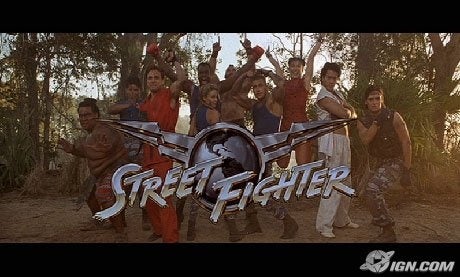 Stay tune for the next segment of 151 Proof Movies.