DMX April is just hitting its stride as we come upon our 3rd movie in this marathon. 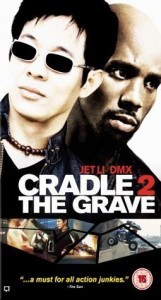 And we get the return of some old faces as Cradle 2 The Grave teams DMX up with Jet Li once more (well actually for the first time, I don’t believe they shared the screen in Exit Wounds) and we have Tom Arnold again.. I’m not quite sure why.

As always though, Swan and I will come up with some drinking rules and test them out while watching the flick. With that said, let’s get to the rule book.

DMX April Bonus Rule– We like to have a bonus rule for any extended marathons. For DMX April, whenever one of his songs is used in the film, take a shot.

There you have it, as always, you can follow along with the fun (roughly) around 10pm ET/7pm PT on Friday nights by following eitherÂ @GT_NOTRÂ orÂ @Wooden_Pint on Twitter or checking out the hashtagÂ #151PM.Â