While we missed a single week this past month, there was still a single Jim Carrey-less sequel movie that we haven’t tackled yet, and while it is Feb 1st, we figured it was close enough to still do this film. Like we always do, we saved the best for last.. possibly. 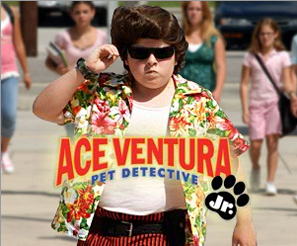 Ace Ventura Jr. was the movie we had the least amount of confidence in being good, but after The Son of the Mask.. it’s got a pretty high bar to cross to be truly horrific.

Before we get to the movie-specific rules, let’s bring out the Jim Carrey-less carry-over rules for one last time.

With that out of the way, let’s get to the Ace Ventura Jr. specific rules.

There you have it. The final set of rules for Jim Carrey-less sequel months. You can join us this Friday, Feb 1st at 10pm EST on Twitter by following @GT_NOTR and @Wooden_Pint or searching hashtag #151PM