[After creating and then testing the drinking rules, guest hosts Trent and Ryan recap their adventures with the first two Saw films, offering their thoughts on the quality of each film as well as how the drinking rules held up and whether they’re worth using.] 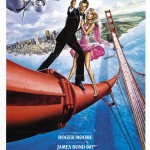 Our Bond marathon has been quite interesting in terms of viewing orders. We wanted to accommodate different tastes we ended up watching Roger Moore’s final film before some of his latter works.

A View To a Kill is an interesting movie as it continues Moore’s legacy of working with demented businessmen, but it is also a refreshing movie that is oddly enough saddled by the fact that Moore’s age is really showing and slowing him down.

But let’s break it down!

I’m going to start this off with the most important fact, drinking and Bond movies DO NOT go together. The amount of things going on in the movie mixed with the alcohol make it nigh impossible to follow, especially if you have not seen the film before hand. With that being said this was definitely a fun movie.

Christopher Walken was at his finest as the villain in this while Roger Moore was charming as always, though he is definitely showing his age in this film. I will admit I was a little scared when in the opening scene Bond jumps on a snowboard while the Beach Boys start playing but luckily that was the only such instance of…..whatever you want to call that.

And I will definitely have to agree with Penguin about the theme, it is clearly one of the best. How can you go wrong with Duran Duran? You can’t, that’s how.

A View To A Kill will never go down as the best Bond film, but it does have it’s strong suits. And one of the most contrived ways to get the title of the movie into the actual movie. I swear that was so ham-fisted into it that we decided to finish our drinks just for the terrible pun.

This is Moore’s 7th and final turn as Bond so by now he pretty much had the role down pack, and the films were kind of designed around hisÂ strengths, which was mostly his charms. The problem is that these are still action films and at the star of filming, Moore was in his mid 50s. His age really showed, both physically, and when he was attempting to perform certain stunts. He was a lot slower moving in the film as well.

On the flip side though, Christopher Walken makes an excellent villain (though when isn’t that the case?) as Max Zorin. One scene in particular when he mows down his own men after his plan has started stands out as one of the cruelest moments in a Bond movie. He is seconded by the frightening MayDay, who makes a perfect accomplice especially with her evil laugh.

The film for the most part, and a lot of Moore-era films attempt, is pretty much just Goldfinger redux. Even down to Bond engaging in a sporting activity with the foe and killing someone in their car from the henchperson. It’s a solid formula, but obviously was done better in Goldfinger.

Now even though I said drinking and Bond films don’t go together our rules still worked out famously here. Bond didn’t get laid as much as he did in some of the previous films so we had very few shots. And everything else had a fair showing.

After watching the four or five Bond movies this month I have realized that our rules work painfully well on the bad movies and not very well on the good one. It is a reverse effect it seems, so we can assume that it works like that for every Bond movie. Bad movie=Heavy Drinking. Good Movie=Not Heavy Drinking. In between Movie=In between drinking.

Distance gives way to clarity. I felt like we drank a lot while watching this movie, but we consumed about as much as we do in an average film, and Bond films tend to be slightly longer than that. So it wasn’t a lot of drinking. Though all rules did get a fair amount of equal play.

Sadly since there is less of a focus put on MI 6 (Lois Maxwell was getting up there in age as well, and Robert Brown had taken over as M) there aren’t as many people calling him 007 nor Bond really. Most of the characters in this movie refer to him as James or for an extended period of time, the name he uses while undercover.Â

There are ton of interesting gadgets on display, but not as bad as some Brosnan films would be. There’s also not as many hook-ups in this film as some previous ones. Though kind of balanced out by the fact that the movie REALLY forces the title into the script at some point.Â

A View to a Kill is an interesting film. If the script and cast had remained the same sans Moore in the role of Bond, I think it would have been a much more memorable movie. While Moore’s charm gets him through the role, he really can’t keep up with the physical aspect of this film, and it really does hurt certain scenes. Namely his initial chance with MayDay and the climax above a bridge in a blimp.