Sometimes, it’s good to go into a movie with a complete blank slate.

Other times, it really doesn’t matter what angle you approach a product from. 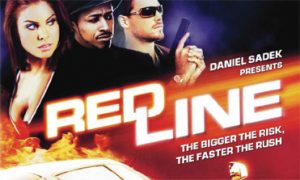 Redline isn’t a bad movie, but it isn’t a particularly good one either. Instead, it gets through its hour and a half runtime by overwhelming the viewer with a bunch of threads of plot instead of one strong central plot. You would think with the basic premise that this would all tie back into street racing in some measure, but that aspect tends to be more of a means to an end than the driving force behind the narrative arc of the film.

Truthfully, I don’t even know the narrative arc of the film. Like there’s a beginning, a middle and an end, but I don’t think if you mapped them out there would be a strong connection between how we get from point A to point C. Most of the characters start the movie in a position very similar to the one they end the movie at. 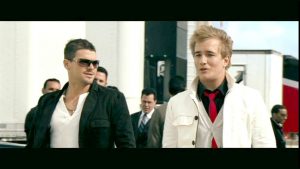 Speaking of the movie’s characters, one of those lingering questions is who was the main character of the film. On one hand, the female lead has most of the major story beats focused around her sphere in some fashion. While the male lead gets most of the big action sequences and heroic moments. It’s like the movie doesn’t know how to write a romantic male lead so decided to make them bad-arse equals.

I will grant the movie this, it knows its shortcomings well enough to mask them under a barrage of hot women, fast cars and action sequences. It’s like Fast and the Furious without the heart of the family… and oddly worse acting.

A poor Fast and the Furious movie should make for a good drinking game, but oddly our rules were kind of a mixed bag.

For rule one about car crashes, I think it would be better to broaden the scope just a bit and make it for crashes and intention car to car action like trying to knock the other car out of the way. The second half of the rule should remain intact even if doesn’t get much use, it’s the point of the addendum.

Rules 2 and 3 were solid rules throughout the film and will give you the most mileage.

Rule 4 was vaguely defined, but broaden doesn’t change the fact that there aren’t a ton of fights in the movie. I guess if you want a bit more usage would include any kicks thrown during the physical fights.

The 5th and final rule needs to better be defined, in the course of this film it should be anytime the brand/name of the car is spoken OR shown. The specific car isn’t mentioned a ton but we do get a lot of glamour shots of the vehicles with their branding front and center.

Finally, if you follow the house rules then the Synder Effect will get you nice and toasty.

There you have it, our review for Redline. A movie that’s probably a 3/7 and a drinking game that won’t quite get you to the finish line in a “good” state.