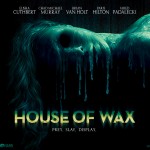 We mentioned last week that sometimes doing an all-purpose set of rules doesn’t really work out. Much like Freddy’s Dead last week, the rules didn’t really do us any favors with House of Wax. So the only thing left is to see if the movie was worth watching on its own.

This is a film that stars Paris Hilton for the sole purpose of killing Paris Hilton. That is why this movie was made and that is the only reason anybody ever watched this. It is a poorly made remake of a classic horror film that does not try to do anything new… but somehow it managed to get something right.

The first act of this movie did a great job of making us hate every single one of the characters. We had our innocent girl, Sam Winchester, the super preppy girl, the token black guy, the bad boy and the bad boys lackey and boy, none of them are likable.  That in my opinion is the major problem with most slasher films. You should LIKE the majority of the characters in the movie, that way you don’t want them to die and when it does happen it actually has an effect on you. This was clearly another one of those films where you want them all to die bloody.

As for the second act I think that this is where the movie got something right. Having two of the main character wandering around the creepy town, building up the atmosphere for the movie and setting the tone. They didn’t do it amazingly but they managed to do it better than one would expect for this movie.

The third act returns to form and seems to go on forever. This is where we start to get our murders, though the majority of them happen off screen. If you are going to do a cheesy slasher flick at least show us the killings. It would be the least you could do movie. Another cool thing in this movie was the finale, which takes place in the HOUSE OF WAX (Take a shot for that if you wish) where our heroes are running from the villains as the house is melting around them.

So as it goes, this movie was below average and I don’t recommend you should watch it. Not even for the Paris Hilton death scene.

I’m going to echo Swan for a bit. The first 2 acts kind of work in setting up the characters, who are all unlikable so could be used for something else, and setting up the bizarre town in which the bulk of the movie would take place. It was very intriguing watching it all unfold. Especially since we had no idea who the killer was going into the film, and they introduced several possible characters.

What Swan didn’t mention, and I think was one of the best parts of the film, and extremely unique, was the setting of the climax. Since the majority of the town was made of wax, we get this awesome visual with the town, people, houses and everything else just kind of melting into the ground. I mean it makes one question where they got the money for all that wax, but it does work.

Also this movie functions more as a thriller than straight up horror or slasher. As Swan mentioned, almost all of the kills happen off screen. Part of watching these movies is seeing all the creative ways they come up with to kill someone!

Two weeks in a row our rules have failed us. We barely made it through our second beer, even having added a movie specific rule. (Anytime the camera is seen or mentioned) I think that our rules may work best on 80’s styled slasher flicks, which we may have to try. Maybe we just picked two bad movies for our rules by fluke or our rules truly do not work and if that is the case I apologize to our fan.

So as we said last week, don’t watch this movie if you are hoping to get drunk.

This movie was so light on drinking that we decided to watch an episode of X-Men the Animated Series to even out the night. In that brief 20 minute episode, we drank about the same as a nearly 2 hour long movie!

Part of it is like I mentioned, this movie doesn’t function like a slasher. Nor do we get introduced to the threat until like an hour in. So while they make a lot of typical dumb horror movie decisions, they don’t do it in the context of a horror movie for more than half the film!

We added a movie specific rule, which helped get some drinks early on, but quickly faded once the movie moved on to the second act.

All in all, not the best movie to watch if you want to get drunk.

House of Wax isn’t a bad movie. It perhaps wasn’t the movie we were looking for on Friday, but it is an enjoyable ride even if our scores don’t necessarily reflect that. Watch it if you want a quality teen thriller, don’t go in asking for a slasher or really much of a horror film though.