Generally speaking after engaging in a movie on a Friday night, Swan and I would offer up our thoughts. This week though since Swanny was a bit under the weather, he did watch the movie but did no drinking. Instead of skipping out on a week though, I figured I would share some thoughts on Home Alone 5 and our drinking game. 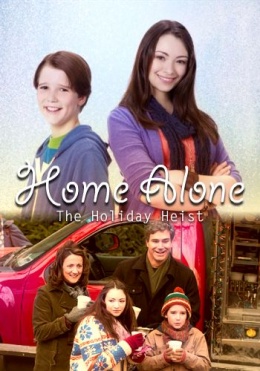 Let’s get this out of the way because it hung over my head this entire movie, the main kid is NEVER actually HOME ALONE. Yeah for a movie that takes its name from being home ALONE, the kid never really is. While a case can be made that his sister remains locked away in a secret room in their basement, she is still in the house. So the movie’s title is a bit of a misnomer.

The movie’s core concept remains the same as the original. A … a kid tries to protect his home from a group of bickering burglars. The film’s first failing is the kid. Where Kevin McCallister (Macaulay Culkin) is a smart, resourceful and cunning kid, this one is whiny, frightened and kind of anti-social. While Kevin did have some fears that he needed to overcome in the films, this movie just goes over board with the entire concept of a haunted house.

Speaking of the haunted house, surprisingly enough “Ghosts” and allusions to ghosts were the number one cause of drinking for us while watching the movie. You wouldn’t suspect it going into a Home Alone film, but they really do spend a good portion of the film driving that point home. Some of it is even used to cover up some rather nonsensical plot points, but this is a kid’s movie.

The burglars don’t fair much better either. Granted, Harry and Marv weren’t the coolest or smartest thieves in the world, but I never felt truly threatened by this trio. It helped that their plan really never made any sense. The main villain, played surprisingly by Malcolm MacDowell (What does he need a paycheck for?) is after a family heirloom that the others believe he is trying to sell while he continues to make it known that isn’t his intentions. Meanwhile, his second in command, Jessica is hung up over their former safecracker that it jeopardizes  their break-in on various different occasions. It doesn’t add to her character just makes for an annoying subplot that is poorly resolved. The final member of the team.. I don’t think is ever really named and isn’t given much to do. The only thing I could think of while watching is that he is a poor man’s Snoop Dogg (or is it Snoop Lion now?).

The family also doesn’t benefit from some great casting. The sister is your fairly stereotypical detached teenage girl with an addiction to her cell phone. She doesn’t really evolve much throughout the course of the movie, but neither did Buzz either. The parents.. are honestly just bland and awful. The mom is a bit high-strung for someone who just moved her family cross country, and doesn’t seem to be open to listening to their gripes with it. The dad is pretty much a non-entity in the movie. Wearing one of the worst forced grins throughout most of the film.

The characters are only half the problem with the film, the other half is the plot of this film. Like I noted at the start of the review, the kid is never home alone. This means that a large portion of the film is spent setting up the family dynamic and the burglars’ quest. The problem is neither of them are really that compelling. I’ve noted all the problems with the characters, but stuff like the ghost sub-plot is pushed too far.

Even more annoying though is the video game sub plot. After seeing Wreck-It Ralph, I was hopeful that video games would be taken seriously in films. This film does a good job of reminding me we have a long way to go. First, the fictional game they made up just looks awful. From both a graphical and gameplay standpoint, it doesn’t look like something that would ever make it to market. Second, they portray the child as hopelessly addicted and anti-social in the film. He can’t do anything because so addicted to games and is even “frightened” of the real world. And just to drive home the fact, the dude that he is always playing with is a bearded, older men with no real friends and doesn’t visit his family much. It was just frustrating and hard to watch as a gamer.

Finally, the movie attempts to play the nostalgia card on several occasions. First, it remixes the original Home Alone theme. It isn’t done nearly as well. Then there are several homages to the original such as the scene where Kevin climbs Buzz’s bookshelf for his spider.. or the infamous shaving scene.. except this time there is no crying. And of course, there are some throwbacks to the original traps.

Ultimately, Home Alone 5 had giant shoes to fill. Home Alone 1/2 are a huge part of mine and many other’s Christmas classics, and there was never any belief that this sequel would top it, but to see it fail on such a colossal level is a bit heart-breaking. For your sanity, keep this movie at all costs.