I believe one of the hardest things to do not just as a critic, but a fan, is to accept that not everything is intended for you. But if you can recognize it and acknowledge it, it does help crystallize a lot of products in your head.

Daphne and Velma is a prime example of this belief. It is clearly not intended for males above… let’s say 25, but that didn’t stop us from checking it out. And I got to say, not bad, not bad at all. It’s not great either, but it lies neatly in that middle ground in which you will be entertained for most of the film’s 75 minute running time. 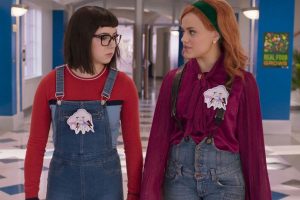 The film has its charm, and it mostly comes from the dynamic of the two lead characters who play well off of each other and gives you a bit of a different look at Velma and Daphne. I especially enjoyed that even with the templates that we know of these characters, they don’t “evolve” into those archetypes by the end of the movie. They start off and end differently, but not as the uber-nerd and pretty girl. It’s a nice zig to what could have been a fairly predictable movie.

The music was also surprisingly awesome. It has some pretty gnarly spooky sounding tunes and nifty special effects.

The drinking game worked fairly well. A decent buzz by the end of it, the technology and spooky rules worked well. If wanted to modify a bit would recommend anytime Daphne or Velma is said in the movie.