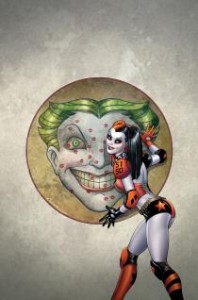 Harley Quinn welcome to your own solo issue in the new 52 universe. There are a few things readers need to consider before reading this issue is that it is a zero issue and there are a ton of artists on this issue. This issue begins with Harley looking at comics wanting a series of her own. She gets her wish and what occurs in the remaining pages is quite a fun adventure. With there being so many artists there are many versions of Harley that pop up. This is where the “fourth wall” She talks to the writers and they respond to her. They talk about the different artists and we get to see what each version of her looks like. There is a ton of great humor thrown in that makes the issue very enjoyable.

Reading this issue is a lot of fun. Usually when there are a lot of artists on a book it can really be challenging to read because of style changes, this issue did a fantastic job of just pointing that out from the get go. Where the story goes from here remains to really be seen but as a single issue this was enjoyable, especially the bit with Batman.

Overall, the series could fail after this one issue but it wouldn’t take away from the humor and enjoyment factor. The conversations between the writers and Harley were funny and the situations she ended up in lived up to the Harley standards. The art is where this book shines and really should be picked up for that alone. 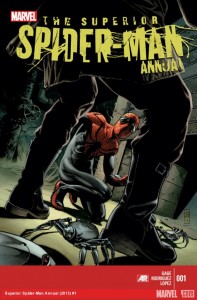 Superior Spider-Man Annual talks about how this story is going to have an impact going forward, there are a few things where it might but overall the story still felt like an annual issue. This issue introduces Blackout, who has battled Ghost Rider in the past (he makes a cameo). Blackout kidnaps Aunt May and Superior Spider-man has to save the day. He gets to Aunt May but she sees how different this Spider-man really is. He tortures Blackout and makes she that he tells everyone to leave Peter Parker and anyone who Peter cares for alone. The news travels fast through the criminal underground.

This issue was the typical damsel is distress issue, but it was interesting seeing how Superior Spider-man would handle the situation. The problem is that with how the outside world views this Spider-Man there must be a lot of concerns, this secret about who he really is must be revealed soon.

Overall, this was an annual issue that was a one shot story. Hopefully the decisions made by Ock show up going forward in the series. The art looks excellent in this issue, and the action scenes are beautiful. Now will someone please call out Spider-man on this “mood swing?” 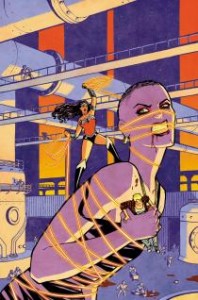 Wonder Woman #25 continues dealing with the gods and their offspring. There are a lot of different stories occurring in the issue, one of the most enjoyable ones is the few pages about Hera dealing with being mortal now. Also we see what has become of the First Born, and Orion makes his return! There is quite a bit that happens here and Wonder Woman needs to go help the First Born and grabs people around her to journey off to his rescue.

First off the art in this book does a good job of being dark, yet not to dark as well as giving the old feel of the gods but in a present day manner. The issue had a lot of things going on and at times can be confusing with all of the different characters and remembering who screwed over who and at which point. That is where some of the trust on Wonder Woman is questionable but the end of the issue.

Overall, Wonder Woman continues to be one of the best superhero books out there today. While a lot of stuff did happen at the same time not much occurred other then really setting up what is to come in future issues. This book really needs a recap, as well as character ID page, to keep everything straight.